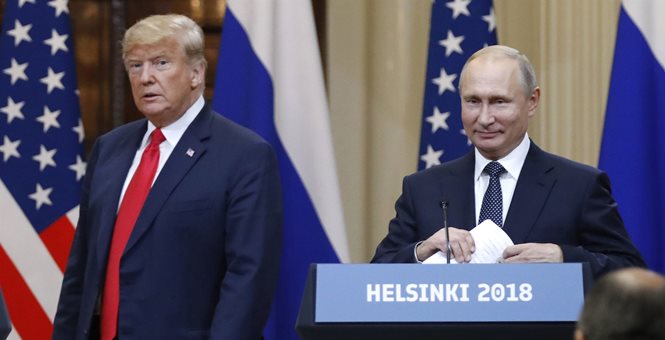 The much-touted meeting between President Donald Trump and President Vladimir Putin saw the two exchange views on a plethora of issues. Both hailed the meeting as successful and constructive, with Trump even praising it as a breakthrough to open a new chapter in US-Russia relations. Perhaps we should refrain from giving the comment too much credence. Although the meeting may have helped promote understanding and bolster personal relationships, it failed to produce anything of true substance. It is, no doubt, a step in the right direction, but the meeting alone will not erase the past seven decades of deep-seated rivalry that has existed since the Cold War.

The US regards Russia as its foremost rival and security threat, and events in Ukraine and Syria have only compounded this, plunging bilateral relations to historic low. President Putin is keen to use the meeting as an opportunity to end the western alienation of his country and foster Russia’s reentry into the global community. President Trump, on the other hand, has mixed feelings about détente with Russia. While he is grateful to Russia for helping him win the 2016 presidential election and genuinely wishes to improve relations, he faces potential backlash at home. It is therefore not surprising that the summit ended in symbolic gestures of understanding, but no real substance.

Considering that the United States and Russia are the two largest military powers, it seems that their frosty relations are a byproduct of a natural strategic rivalry. In theory, the Trump administration presents a golden opportunity for a rapprochement between the two powers. When President Trump picks fights with the world at large, he invariably spares Russia, indicating his genuine desire to improve relations. Yet, the US went ahead with enhanced sanctions against Russia and a mass expulsion of Russian diplomats, even if these measures may not have been executed with Trump’s full support. In spite of President Trump’s desire to improve relations with Russia, he finds his hands tied for a number of reasons.

First, the US-Russia rivalry cannot be ended in one stroke. This is primarily because the United States still hopes to undermine Russian influence abroad and westernize Russia, weakening its geopolitical competition. These aims have been met with persistent pushback from Russia, which has been pursuing a developmental path tailored to its own national interests. Diverging goals lead to serious differences and reconciling them remain an uphill battle.

Second, US domestic pressure is at play. As the US and Russia have mutually-assured destructive power against each other and their foreign policy goals remain at odds, there is bipartisan support behind the notion that the US should contain Russia’s expansion, both physically and ideologically. Trump, conscious of public opinion, will have to rein in his desire to repair relations with Russia, therein retracting his previous proposal to lift sanctions, recognize Russian sovereignty over Crimea, and bring Russia back to the G7/G8. He claims to be tougher than his predecessors on Russia, and US Russia ties are at historic low, evidence of his loyalty to US interests.

Third, the ongoing investigation of special counsel Robert Mueller into Russian interference into the 2016 US election complicates the situation. Just before the summit, a grand jury indicted 12 Russian intelligence officers for their alleged involvement in election meddling, much to the embarrassment of President Trump. Fortunately for him, the Republican Party has largely warmed to his presidency, taking some of the heat out of the Russia investigation. As long as the investigation is ongoing, however, Trump can ill-afford to act in any way he pleases on Russia in case this backfires and derails Republican efforts to win the midterm elections. If the GOP loses its majority, the Russian investigation will gain renewed traction, imperiling Trump’s presidency.

Fourth, there will be pushback from European countries. They also see Russia as a security threat and main challenger. It is the policy of the EU to contain Russia, and a closer US-Russia relationship at the expense of Europe is the last thing that they would like to see. European countries and the US don’t see eye-to-eye on defense spending or trade deficit issues, but because maintaining close Transatlantic ties is vital to US interests, the Trump administration will not disregard the wishes of its European allies.

In a nutshell, Trump will not significantly alter the status quo of US-Russia relations in the near future. That said, Trump will continue to harbor affinity towards Russia given the role Russia played in the 2016 election and Russia’s attitude towards the Mueller investigation. During Trump’s presidency, the United States and Russia will not head towards conflict or confrontation. Rather the tense relations will be improved to some degree. Overall, this is quite positive, as moderate improvement is favorable to further deterioration.

U.S.-Russia Relations
printTweet
You might also like
Back to Top
CHINA US Focus 2022 China-United States Exchange Foundation. All rights reserved.