For three years, the nuclear accord (JCPOA) offered Iran relief from the multilateral sanctions on energy, financial, shipping, automotive and other sectors.

The shift in the U.S. policy began in late 2016, when Congress extended the Iran Sanctions Act for a decade. That emboldened Trump's unipolar stance.

But what are the immediate economic and strategic implications?

Regionally, Trump’s stance leans on Saudi Arabia for economic and geopolitical support, as evidenced by the $110 billion arms deal with Riyadh in 2017, and reinforces security ties with Israel. The increasing convergence of the U.S., Saudi and Israeli interests in the Middle East reflects a quest for regional primacy.

Initially, John Bolton, Trump’s neoconservative national security advisor, urged Trump to bury the JCPOA and push for a regime change before February 2019; the 50th anniversary of the Iranian revolution. The new timeline is more flexible, but the old objectives remain. The three-step destabilization was started with the rejection of JCPOA (juridical pressure), which was followed by sanctions (to cause economic pain) that would provide the pretext for regime change (military intervention in the name of “peace and democracy”).

If Iran’s production capacity takes a hit, that will penalize particularly its biggest importers; that is, China, India, South Korea and Turkey, which accounted for two-thirds of all Iranian exports in 2017, along with Japan, Turkey, Europe (Italy, France), and UAE (Figure 2). Consequently, the strategic responses to U.S. sanctions by Iran’s major export destinations matter. Available data on oil purchases in the past 6-12 months indicate that China, India and Turkey have reduced their buys by about 25%, respectively; Japan by 20% and South Korea almost entirely. Yet, the role of “unknown sources” in Iran’s oil exports has quadrupled. 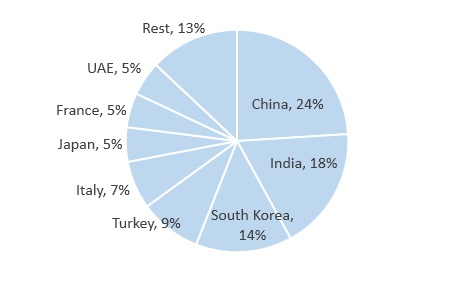 Conversely, import diversification tells something about their degree of reliance on Iran. Last year, China’s largest crude oil importer was Russia, followed by Saudi Arabia, Angola and Iraq. These top-4 suppliers accounted for half of China’s total oil imports. Among them, Iran ranked seventh accounting for 6.3% of the Chinese total. In turn, India’s largest suppliers featured Saudi Arabia, Iraq, Iran and Nigeria, which accounted some 60 percent of the total. Among these, Iran was third, accounting for 11% of the total - that is, twice as much as to China in relative terms (Figure 3). 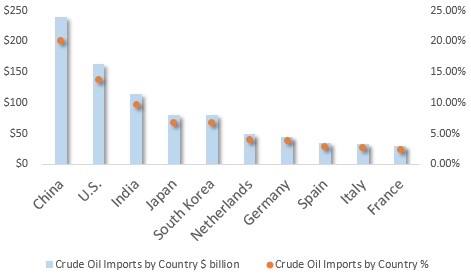 Obstacles to the regime change ploy

In May 2018, Trump had the U.S. withdraw from the JCPOA, while pledging to reimpose U.S. secondary sanctions by November 2018. The reinstatement drove Iran’s economy into mild recession as major companies exited the Iranian economy rather than risk being penalized by the U.S. Iran’s oil exports have decreased significantly, and the value of Iran’s currency has declined sharply.

The EU and some other countries are trying to sustain the economic benefits of the JCPOA flowing to Iran, hoping to keep Tehran in the accord. From Iran’s viewpoint, these efforts have been promising, but remain far from adequate.

Geopolitically, the destabilization of Iran is designed to foster the regional supremacy of America’s key allies in the region, particularly Saudi Arabia and the Gulf states. Strategically, the Iran sanctions serve major oil exporters which just happen to be among the key suppliers of both China and India, respectively - that is, Saudi Arabia, Iraq, and the Gulf (Oman, Kuwait, UAE, Qatar).

Nevertheless, the Trump hawks' of Iran plans are based on misguided assumptions. Saudi Arabia and the UAE can boost higher production levels some of the time, but not all of the time. A protracted effort could destabilize markets further. More importantly, Saudi Arabia (and the U.S.) can offer mainly "light crude oil," but not “heavy oil,” which many countries need for refined oil products - and which Iran can offer.

Furthermore, China and Turkey, which oppose U.S. unilateralism, along with possibly India and some EU allies, will try to work around U.S. sanctions for economic, geopolitical and development reasons. While China is not critically reliant on Iranian oil, it vehemently opposes unipolar bullying.

There is also the last-resort scenario. If the White House will push Iran against the wall, it could close the Strait of Hormuz - which no oil exporter or importer wants.

The Trump administration believes that America’s military superiority, economic clout and energy dominance suffice to undermine the JCPOA and achieve regime change. Yet, U.S. shale oil is not adequate to dictate unipolar terms to the rest of the international community. Moreover, most Americans see U.S. involvement against Iran as an unnecessary risk. Finally, U.S. economic power is overshadowed by its $22 trillion sovereign debt and the end of the expansionary cycle.

The JCPOA fostered Iran’s economic development, which would have had a constructive effect on its regional role. U.S. efforts at regime change have not played out expectedly even in Venezuela; and Iran is far more capable and determined to defend its rights in the international arena, with the support of much of the international community.

Economically, sanctions against any major oil exporter will diminish total capacity worldwide and boost crude prices. Before the 2008 global crisis, oil prices soared to almost $150 per barrel. After a severe plunge to $40, they returned to $100 in the early 2010s. As the Fed’s rate hikes caused the U.S. dollar to strengthen, oil prices, which remain denominated in dollars, plunged to mid-$20s. Since then, Fed hikes have normalized and U.S. dollar steadied, which supports rising prices (Figure 6). 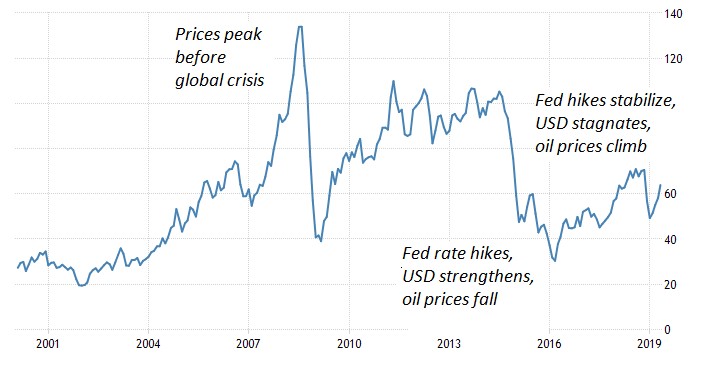 Until the late 1960s, America was still an oil exporter. In the past half a century, it has been an importer, which has constrained its geopolitical aspirations. That is now changing. To President Trump, America’s “energy dominance” means not just economic muscle, but geopolitical muscle as well. That explains much of recent U.S. assertiveness and regime change plans in Iran (and Venezuela). Yet, U.S. production accounts for barely 15% of global output, which limits its ability to move global oil markets.

Despite its vocal threats, the Trump White House is in a double-bind. If it does not deliver regime change in Iran, it will be seen as a paper tiger, which will further erode U.S. credibility in the Middle East. If it executes its violent plans, the result could be years of violent turmoil, a destabilized region, derailed global prospects - and oil prices exposed to new supply shocks.

U.S.-IranIran Nuclear DealChina-Iran Relations
printTweet
You might also like
Back to Top
CHINA US Focus 2022 China-United States Exchange Foundation. All rights reserved.