Based on a news release from the official US Navy website, the US Navy’s John C. Stennis Strike Group exited the South China Sea on March 6 after six days of “routine operations” beginning on March 1, though it was the carrier crew’s first time operating in the South China Sea since its regularly scheduled deployment began Jan. 15. 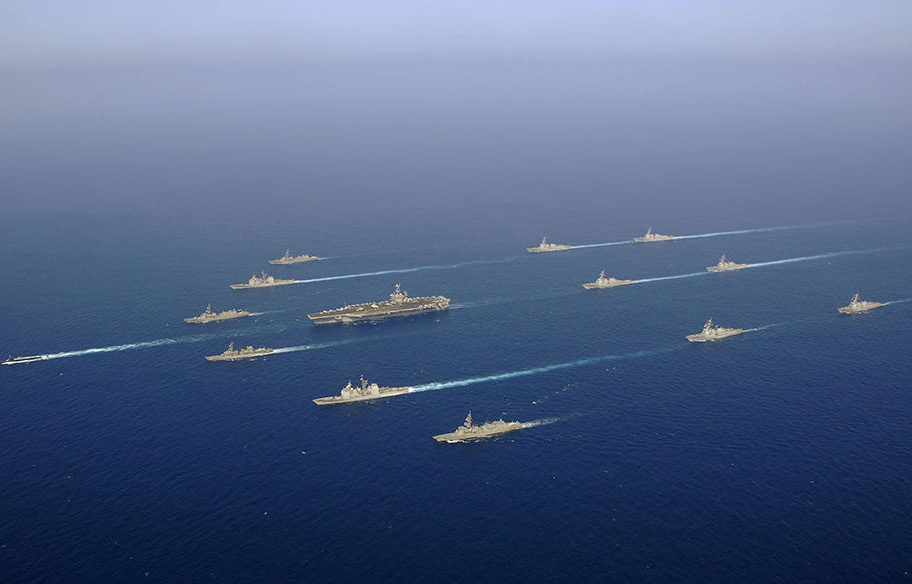 Quite surprisingly, none of ships within the strike group came within 12 nautical miles of Chinese islands, which would have signaled a formal freedom of navigation operation within territorial seas. According to the Navy news release, the seemingly routine operations include daily flight operations and a replenishment-at-sea during transit.

The US side even downplayed the operation by emphasizing the technical details of the crew’s feeling about their first training during the transit. Unlike the media reports of the US navy fleet being surrounded by large numbers of Chinese warships, the US side gave a different version of the story saying that the Chinese ships remained “in the vicinity of” Stennis during its time in the SCS, and that “all bridge-to-bridge interactions between the sailors of both navies were professional”. Rear Adm. Ronald Boxall, the carrier’s commander, said he is not surprised by other countries’ interests in the strike group. Still, the deployment put the Asia-Pacific region on high alert and left many wondering what the move signals and what impact it will have on regional peace and stability.

The first interesting point about the US military deployment is that it was accompanied by unusually high-profile media coverage. Unlike the previous nearly unnoticed mission, the US Navy spokesperson, unnamed military officials and military experts have released a wave of information both before and after the operation. The carefully designed media coverage apparently shows the US wanted its “operation” to be trumpeted so that it could enhance the perception of its military presence in the region.

Another sensitive issue is the timing of the US operation. Tensions have been rising since the US military sent its vessels close to and flew its aircraft over China’s islands in the South China Sea. Now, the deployment of a muscle-flexing aircraft carrier in a greater show of strength — seemingly because, as the US claims, “China is militarizing the region to guard its excessive territorial claims” — will heighten the tensions. In particular, the just-ending Two Sessions are China’s most important domestic political agenda-setting forums. The choice of such a time for the mission is politically thought-provoking, notwithstanding a cultural background of truce shared by both the East and West for such important days.

Sticking to its stance on its previous maneuvers in the South China Sea, the US has also emphasized that the new operation is routine. The US has claimed its ships and aircraft have been operating freely for decades in the Western Pacific — including the South China Sea. But that does not sound convincing.

It is true that the US has long maintained a strong military presence in the region. But now it is in process of deploying 60 percent of its warships and military aircraft in the Asia-Pacific as part of its “pivot to Asia” policy, which could seriously affect the regional balance of power. More importantly, the patterns and attitude of the US military are becoming more provocative, hostile and aggressive, as proved by its recent incursions into the waters near China’s islands and reefs in the South China Sea. Those changes on part of U.S. could hardly be played down as “routine operations”.

How China will respond depends largely on US intentions and behavior. If the US military vessels and aircraft travel thousands of miles just to create trouble, China has the inherent right to self-defense as guaranteed by the UN Charter and other international laws. The non-routine US buildup of military presence in the SCS constituted the root causes of the rising tension in this region. The growing sign of US “Caribbeanizing” of the South China Sea also highlights the necessity and emergency of China adjusting defense facilities on its islands there.

If the US military vessels and aircraft transit this area in line with international law, the exercise of the freedom of navigation is guaranteed to every country under the Law of Sea Convention. However, even the UN Convention on the Law of the Sea fails to provide explicit regulations on activities involving “innocent passage” of warships through territorial seas. More than 40 countries’ domestic maritime laws require foreign warships to give prior notice or obtain prior authorization before entering their territorial waters. And it will be baseless if the US tries to use “freedom of navigation” as an excuse to interfere in the regional sea disputes.

Other regional countries — particularly members of the Association of Southeast Asian Nations, many of which may not be willing to choose sides — cannot remain unaffected by the rising tensions. So, they should play a more responsible and positive role to defuse the tensions.

The promise of promoting peace and stability in the South China Sea may sound very familiar to regional players as they have heard same slogans many times in Afghanistan, Iraq, Libya and Syria. It is also questionable whether the regional countries truly support the US FON operations if it means that military vessels and aircraft of the US can freely access their territorial waters and airspace. The US could easily pull out its military from the area after inciting a conflict and leaving China and many regional countries to the pay the price for its actions. Therefore, all regional countries have to make concerted efforts to maintain peace and stability in the South China Sea.

South China Sea Territorial Disputes
printTweet
You might also like
Back to Top
CHINA US Focus 2020 China-United States Exchange Foundation. All rights reserved.