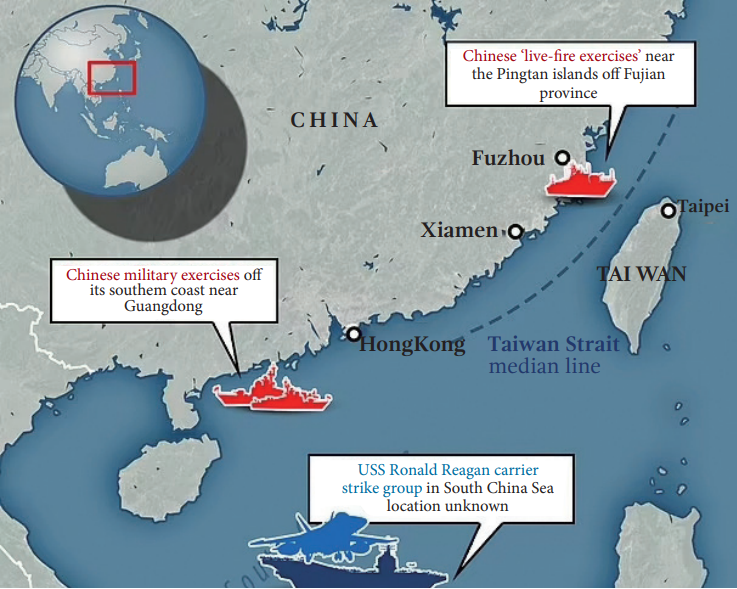 U.S. House Speaker Nancy Pelosi’s visit to Taiwan has met with strong opposition, stern condemnation from Beijing, live-fire military drills and clear sanctions. The Chinese mainland’s responses have been reasonable, measured and proportionate in safeguarding the three Sino-U.S. joint communiques, China-U.S. relations and overall stability in the Taiwan Strait. Pelosi’s visit, by contrast, is a serious violation of the “one China” principle. The U.S. case for the visit is built on shifting ground, and China has every reason to respond the way it did.

First, the visit by Pelosi, the third-highest ranking official of the U.S. government, is itself a violation of the one-China principle. In the three Sino-U.S. joint communiques — especially in the communique on the establishment of diplomatic relations between China and the United States — the U.S. side clearly recognized the central government of the People’s Republic of China as the sole legitimate governing authority and promised not to develop official relations with Taiwan. However, after the establishment of diplomatic relations the U.S. introduced the Taiwan Relations Act, which was a violation of its own commitments. In the course of its contacts with Taiwan, the U.S. side violated the communique again by making its “Six Assurances” to the island. Taking it to extremes, the Trump administration even put the Taiwan Relations Act and the Six Assurances on par with the three joint communiques.

These are serious violations of the U.S. commitment to China and have severely undermined their common political foundation. During Pelosi’s visit to Taiwan, some people cited America’s system of “separation of powers” and the independence of the legislative branch of government as excuses to cast the trip as unofficial. However, Pelosi is third in the line of succession to the U.S. presidency and she has repeatedly said in public that she supports Taiwan on behalf of the United States — both during and after her visit. Representing the United States is, in itself, a blatant official act and a serious violation of both the one-China principle and the three Sino-American joint communiques, plain and simple.

Second, the U.S. executive branch has not only been hollowing out the connotations of “one China” but has also attempted to justify Pelosi's visit, which is a serious breach of its own commitment. In recent years, apart from engagement with Taiwan in Congress, the U.S. executive branch — the president and administrative departments — has backtracked on its one-China policy. That branch, though well aware that China strongly opposed Pelosi’s visit to Taiwan, did not take corresponding measures. Instead, it justified her actions and gave her free rein in undermining the common China-U.S. political foundation and impacted the bottom line of cross-Strait relations.

Click to read the lastest issue of China-US Focus Digest

Before Pelosi’s visit, Secretary of State Antony Blinken argued that there was precedent for a House speaker visiting Taiwan — Newt Gingrich — in a vain attempt to justify the Pelosi incursion. But it bears reinforcing that Beijing also lodged strong representations during Gingrich’s visit, which likewise had a deleterious effect on China-U.S. relations and the situation in the Taiwan Strait.

Further, Blinken has been hollowing out the one-China policy imperiled China-U.S. relations and destabilized the situation in the Taiwan Strait. For example, the U.S. State Department removed from its website the statement that “Taiwan is part of China.” In an earlier version, it even removed its pledge of non-support for Taiwan independence, although the phrase was later reinstated after strong Chinese opposition, or perhaps out of remorse of having broken its commitment. Such words and actions, which continue to hollow out the one-China policy, only strengthen ties with Taiwan authorities and elevate U.S.-Taiwan relations. They are a serious violation of the commitments made by successive American administrations since the establishment of diplomatic relations between China and the United States.

Third, Pelosi’s visit to Taiwan will have an extremely negative demonstration effect, likely triggering more serious developments in the Taiwan Strait. China has taken strong countermeasures against Pelosi’s visit, but the U.S. side — especially the so-called “Taiwan link” faction in Congress — has already begun to redouble its efforts by making more visits. Congress may also craft more bills on Taiwan — such as the emerging Taiwan Policy Act. If that bill becomes law, China-U.S. relations will be further aggravated and the situation in the Taiwan Strait will become even more volatile.

In addition, in the wake of the People’s Liberation Army’s military exercises, U.S. arms sales to Taiwan will further increase and the U.S. will take a more aggressive approach to decoupling manufacturing chains with the Chinese mainland, all of which will be detrimental to China -U.S. relations and regional security. What’s more, America’s allies may follow suit. Further visits by members of Congress, the constant introduction of Taiwan-related bills and the passage of Taiwan-related laws, they may join in breaching the bottom line of cross-strait relations, stirring up trouble on both sides and triggering a crisis.

If the U.S. fails to reflect and draw lessons from the Pelosi visit but instead creates a malicious spiral of events, it takes no stretch of the imagination to fear that the security and stability of the Taiwan Strait will see less optimistic prospects.