Mar 11, 2013
printTweet
For further reading , please click Ch1 excerpt
Most global citizens are well aware of the explosive growth of the Chinese economy. Indeed, China has famously become the “workshop of the world.” Yet, while China watchers have shed much light on the country’s internal dynamics–China’s politics, its vast social changes, and its economic development–few have focused on how this increasingly powerful nation has become more active and assertive throughout the world. 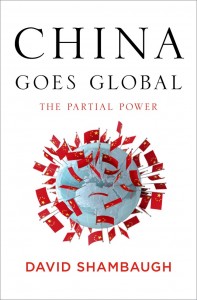 In China Goes Global, eminent China scholar David Shambaugh delivers the book many have been waiting for–a sweeping account of China’s growing prominence on the international stage. Thirty years ago, China’s role in global affairs beyond its immediate East Asian periphery was decidedly minor and it had little geostrategic power. As Shambaugh charts, though, China’s expanding economic power has allowed it to extend its reach virtually everywhere–from mineral mines in Africa, to currency markets in the West, to oilfields in the Middle East, to agribusiness in Latin America, to the factories of East Asia. Shambaugh offers an enlightening look into the manifestations of China’s global presence: its extensive commercial footprint, its growing military power, its increasing cultural influence or “soft power,” its diplomatic activity, and its new prominence in global governance institutions.

But Shambaugh is no alarmist. In this balanced and well-researched volume, he argues that China’s global presence is more broad than deep and that China still lacks the influence befitting a major world power–what he terms a “partial power.” He draws on his decades of China-watching and his deep knowledge of the subject, and exploits a wide variety of previously untapped sources, to shed valuable light on China’s current and future roles in world affairs.

China does not see itself as a rising, but a returning power . . . It does not view the prospect of a strong China exercising inﬂ uence in economic, cultural, political, and military affairs as an unnatural challenge to world order—but rather as a return to a normal state of affairs.  — HENRY KISSINGER, 2012 2
China’s peaceful development has broken away from the traditional pat- tern where a rising power was bound to seek hegemony.  —China’s White Paper on Peaceful Development, 2011 3
The United States welcomes China’s rise as a strong, prosperous and suc- cessful member of the community of nations.  — PRESIDENT BARACK OBAMA, 2011 4
For further reading , please click Ch1 excerpt
China’s Rise China-US Relations Major Power Relationsstions
printTweet
You might also like
Back to Top
CHINA US Focus 2022 China-United States Exchange Foundation. All rights reserved.