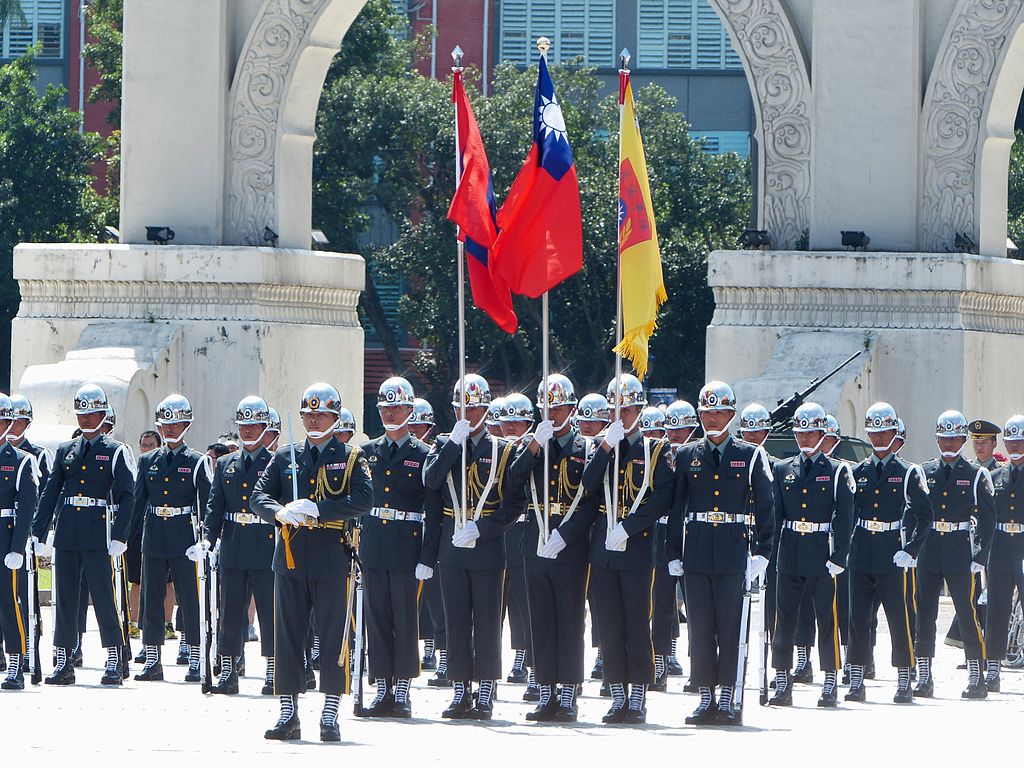 For Americans, Taiwan’s defense equation is important. The U.S. does not have an “iron-clad” commitment to defend Taiwan. As President Jimmy Carter once observed, however, the Taiwan Relations Act provides a U.S. president with an option to go to war to protect the island. Indeed, America is Taiwan’s only potential security partner in a conflict with the Chinese mainland.

For decades, U.S. officials have urged Taiwan to boost its defense spending. As a percentage of governmental budget outlays, defense spending is now substantially less than the allocations made 25 years ago. Troop levels have also been slashed. And promises to boost the defense budget from roughly 2% of GDP to 3% remain unfulfilled. Not surprisingly, such developments have led some to question the willingness of Taiwan’s people to fight should a conflict break out across the Taiwan Strait.

On April 19, 2018, officials of the Taiwan Foundation for Democracy (TFD) called a news conference to assuage growing fears about Taiwan’s commitment to its own defense. Reporters were told that a public opinion poll commissioned by the TFD found that almost 68% of Taiwan’s people were willing to go to war with China if it seeks to force reunification. The poll’s findings made headlines in Taiwan’s media outlets. Should Americans now breathe a sigh of relief? Unfortunately, the answer to that question is no.

In 2007, my book, Foreign Policy Making in Taiwan: From Principle to Pragmatism (London: Routlege), warned readers that many of Taiwan’s public opinion polls are “flawed methodologically—either intentionally or unintentionally—and might best be described as “nonsense polls.” Candidates, political parties, the media and even governmental agencies have manipulated polls to achieve desired results.” It’s been over ten years since that book was published, but little has changed.

After sharing the TFD questionnaire with other American academics—experts in polling, quantitative methods and methodology—it appears that the reliability of the TFD findings are highly debatable. This is because the questions about “being willing to fight to protect Taiwan” suffer from a problem that professional pollsters describe as “acquiescence bias.” This means the poll’s respondents were basically provided with only two choices—fight or not fight—when there are many other options on the table. Certainly some might join the military and fight. But others might flee the country, commit suicide, collaborate with the enemy or shelter in place. At the same time, it was pointed out that the wording of the questions was not balanced. The term “fight to protect Taiwan” was not clearly explained to respondents and neither was the term, “not fight to protect Taiwan.”

Fortunately for those interested in Taiwan’s national security, there is a more reliable poll available. The Taiwan National Security Survey (TNSS), which is conducted by the prestigious Election Study Center of Taiwan’s National Chengchi University, under the auspices of the Program in Asian Security Studies at Duke University, is a scientific poll. Since 2002, this survey has been conducted eleven times, most recently during November-December 2017. The results are illuminating, and they do not always fit the narrative of Taiwan’s politicians and pundits.

Like the TFD poll, the TNSS poll seeks to measure how Taiwanese will respond “if war breaks out between Taiwan and the Mainland.” Unlike the TFD survey, however, this sensitive question was “open ended” which enabled respondents to choose their own answers rather than select between merely two options (and “don’t know”). The responses were then coded into 16 separate categories. Like TNSS polls conducted in past years, the results raise some eyebrows. The survey found that 36.9% plan to “wait and see, 16% percent plan to leave the country, 2.2 % will hide away and 1.8% will “choose to surrender. On the other hand, 6.2% will support the government’s decision, 4.9% will join the army to fight against the invasion, and 4.1% will resist the invasion. The good news is that only 0.1% will commit suicide. But the bad news is that a solid majority plans to “wait and see,” “leave the country,” “hide” or “choose to surrender.”

The TNSS findings outlined above surprise many observers—including the Taiwanese people. Interestingly, the poll shows that a majority of respondents (52%) believe that most people will resist a mainland attack. But the survey includes other surprises and contradictions.

Taiwanese trade and investment in the Chinese mainland is a big political issue in Taiwan. Despite a recent initiative to shift economic ties to Southeast Asia, an overwhelming majority (59.1%) support strengthening commercial ties with China. Still, many view Taiwan’s economy as vulnerable to shifts in cross-strait relations. Roughly 70% fear that heightened cross-strait tensions will hurt Taiwan’s economy in coming months and roughly 65% now believe that relations with China might best be described as “hostile.” Moreover, the TNSS poll reveals that a majority (51.7%) fear that increased dependence on China will enable Beijing to use its economic leverage to squeeze political concessions out of Taipei.

More surprising than the contradictions associated with cross-strait economic linkages are the TNSS’ longstanding and consistent findings about Taipei’s overall approach toward relations with Beijing. For eight years (2008-2016), the previous administration in Taiwan endorsed the 1992 Consensus, an understanding whereby both sides agreed that there is one China but differed on the interpretation of what that means. The formula yielded numerous dividends—including an historic détente that lowered cross-strait tensions to unprecedented levels. Despite the efforts of the current administration (and the island’s independence-leaning media), the TNSS findings reveal that a solid majority of Taiwanese (58.1%) still support the practice of pursuing cross-strait relations under the One China policy, but with their own interpretation of it. This support for the 1992 Consensus squares nicely with the survey’s findings that a majority (67%) agree that there is no need to declare independence because Taiwan is already an independent country and its name is “the Republic of China.”

The discussion above outlines only several findings in the current TNSS poll. A more complete analysis would include an examination of other survey results as well. For example, roughly 75% of respondents do not believe that Taiwan’s military is capable of defending the island against an attack from China. This is not news—it is consistent with findings of earlier polls. However, one significant surprise is the shift in perceptions of American military support for Taiwan. For the first time ever, the TNSS data shows that a plurality of Taiwanese (43.4%) now agree that the U.S. will not send troops to help Taiwan if it declares independence from China.

What do the TNSS survey results tell us about the Taiwanese people? Taiwan’s security rests upon three pillars—military ties with the U.S., stable relations with mainland China, and a formidable military. But pillars must arise from strong roots. The TNSS data reveals that most Taiwanese have doubts about the strength of these pillars. For the first time, a plurality of Taiwanese no longer believe that America will come to the island’s defense if it declares independence. This message was telegraphed to the authorities in Taiwan repeatedly during the administration of President George W. Bush, but the warning was not deemed credible. It seems it has finally been received. Second, most Taiwanese agree that cross-strait relations are now “hostile” and that Taiwan’s economy will suffer as a result. Third, almost no one in Taiwan (12%) think the island’s military is capable of repelling an attack by mainland China. And while most Taiwanese believe others will stand and fight if there is a conflict, as in past years, the TNSS data shows that a majority might be planning to do otherwise.

What do the TNSS survey results mean for the U.S.? The TNSS has raised worries every year since its initial release in 2002. In this instance, however, it’s possible to find a few nuggets of good news. For starters, it appears that the U.S. may be hearing the death knell of the so-called Taiwan independence movement. This is good news because a declaration of independence is the most likely trigger for a cross-strait war—a deadly decision that might eventually involve our armed forces. For the first time ever, the TNSS shows that most Taiwanese agree that the U.S. will not defend the island if it provokes a war with a declaration of independence—a position consistent with opinion polls in the U.S. That should put a brake on any rational person advocating independence. Second, it is good news that the silent majority of Taiwan’s people still support the “One China with their own interpretation” framework for handling cross-strait relations. Perhaps it’s too late for the current administration in Taipei to wake up and change course. But the TNSS data shows that only 23.4% approve of Tsai Ing-wen’s performance as Taiwan’s president. After the 2020 presidential election in Taiwan, a new administration will have a reservoir of popular support should it choose to return to the 1992 Consensus, thereby stabilizing relations with Beijing. And this would be good news for America, peace and stability in the Western Pacific.

Taiwan
printTweet
You might also like
Back to Top
CHINA US Focus 2023 China-United States Exchange Foundation. All rights reserved.