The Anxious Diasporas at China's Doorstep 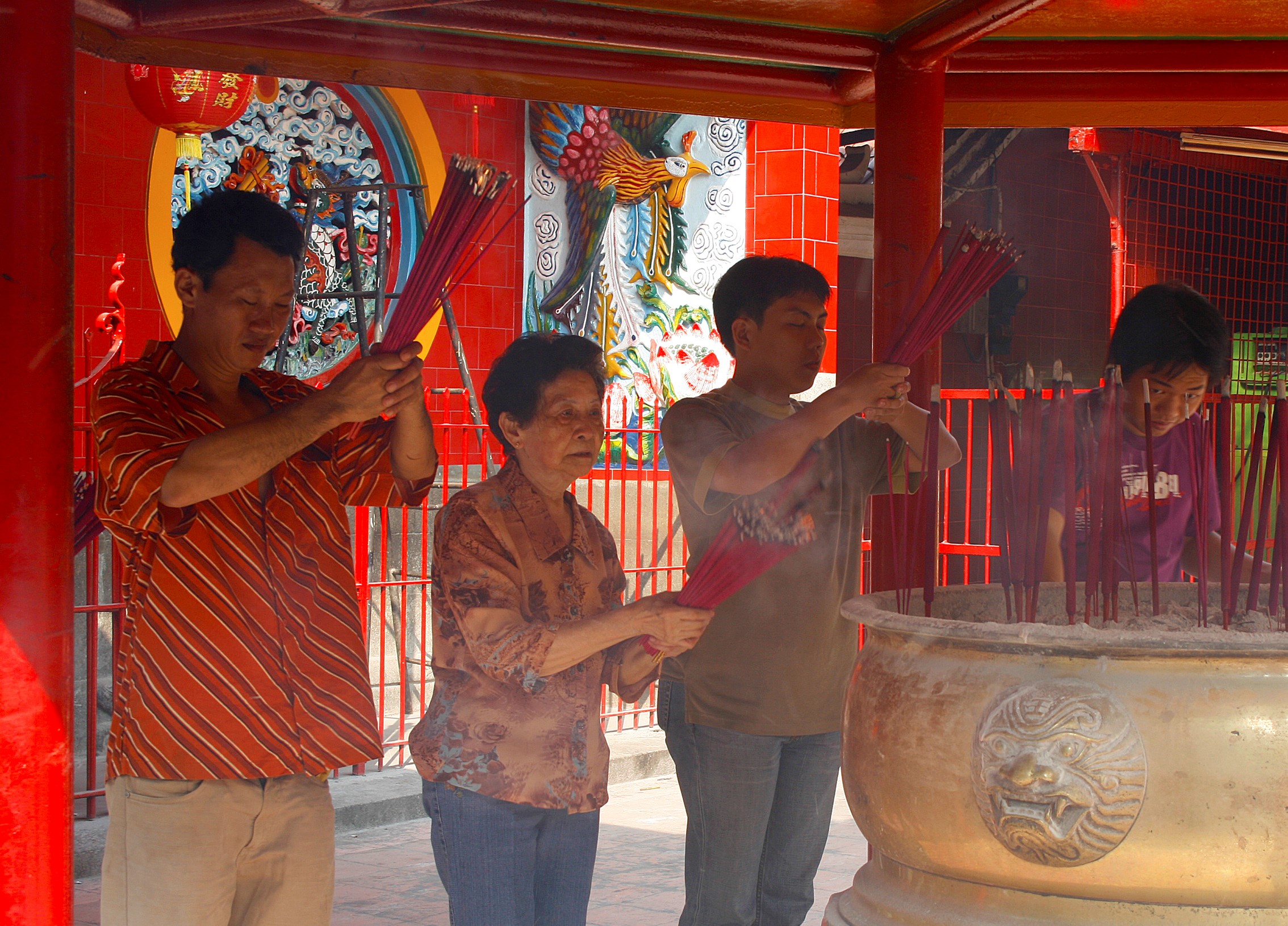 Indonesian Chinese pray at a temple in Jakarta

They came in small boats from across the sea, some fleeing war and famine, some only poverty, some with children, or sacks of meager possessions, or just the shirts on their sun-scorched backs.

The sun beat heavy overhead and by day the sea was a glistening mirror and by night the sky was a kingdom of stars. The boats creaked with the waves and hopes frayed and tempers flared as supplies dwindled and teeth loosened in bleeding gums. But they survived—or didn’t.

When they arrived on alien shores some set up small shops. Others chose to work in mines or plantations. Or maybe they were indentured servants and had no choice in the matter at all, their professions, for a time, determined by whoever had arranged their transit.

Some rose to unimaginable heights. From small family businesses selling humble products, they expanded and reinvented and diversified. They bought land and farmed it, or built on it. They laid bridges and roads and railways. They brought in new goods and technology and franchises. They, or their descendants, became tycoons, titans of industry with a seat at every table. Eschewing confrontation, they cut deals with those in power, forming symbiotic relationships with them, sometimes legal and sometimes not. And as the officials and politicians came and went, their families endured.

Far more often however, they had more modest fortunes. No plaques bore their names and no papers carried their pictures and no special deals helped line their pockets. They lived unassuming lives, yet their success was no less crucial to the success of their new countries.

Such is the story of the Chinese diasporas of Southeast Asia, the progeny of migrants who crossed the South China Sea seeking safety or food or fortune. In my own home country of Malaysia, they comprise 7.3 million people – about a quarter of the country’s population. My father’s side of the family came from Fujian province during my great grandmother’s time. My mother’s side has lived in Malaysia for so long that no one’s sure when they arrived, nor even what part of China they were from. Most other ethnic Chinese families in Southeast Asia have also lived in their adopted countries for generations, and feel much stronger ties to those countries than to China.

Yet some ties to China remain. In many of these countries, the Chinese community continues to speak Chinese dialects, practice Chinese customs, and consume Chinese media. Relatives on my father’s side of the family used to send their old clothes to our poorer kin on the mainland, and some of them have made visits to our ancestral village in Yongchun. In recent decades, many ethnic Chinese have also felt a sense of pride at China’s rise – some of my Malaysian Chinese friends and relatives often share videos of its latest great infrastructure project or news of its economic accomplishments, and boast of its ancient civilization as part of our heritage.

This shared kinship is a valuable resource for China, if it uses it right. Indeed, these ties have facilitated or eased many ventures between China and the region in both public and private sectors. In response to Chinese President Xi Jinping’s appeal for investment, for example, 3,500 companies owned by overseas Chinese, many of them from Southeast Asia, expanded into China’s special economic zone network, totaling $43 billion. For whilst ethnic Chinese are minorities in Southeast Asian countries, they are also market-dominant. In Malaysia, Chinese businesses account for 70% of the country’s market capitalization. In Indonesia, the Chinese hold a large share of the private economy, whilst constituting just 1% of the population. In the Philippines, they constitute 1% of the population and control 60% of the private economy.

This disparity between the size of the Chinese communities and their share of the wealth makes them vulnerable, and anxious. Politicians on all sides have often found it expedient to whip-up resentment against these minorities amongst the majority ethnic group for political gain. Local demagogues sometimes call the Chinese the Jews of Southeast Asia, and call for their persecution.

In Malaysia politicians, including many in the ruling party, frequently rail against the Chinese minority, calling them greedy and immoral, and calling for boycotts of their goods. The deputy prime minister, Ahmad Zahid Hamidi, belittles the contributions of the Chinese community, suggesting (incorrectly), that they are the ones responsible for illegal businesses. The prime minister, Najib Razak, uses them as boogeymen to scare up Malay votes and makes barely-veiled threats against the Chinese, warning that they “will be the first to be targeted” if his rule is threatened. Over its decades in power, the ruling party has also enacted a series of racist laws targeting minorities.

In Indonesia, this dynamic can be seen in the recent fall and imprisonment of Jakarta’s governor, Ahok. Resentful of how far this Chinese (and for good measure, Christian!) governor had risen, and of his competent, if hard-nosed, administration, 200,000 members of the Muslim majority, encouraged by unscrupulous politicians like Anies Baswedan and Prabowo Subianto, demanded his arrest on laughably false charges of insulting Islam. Under pressure from these Islamists, and abandoned by his so-called ally, Joko Widodo, Indonesia’s president, he lost the gubernatorial election, and was sentenced to two years imprisonment for blasphemy soon after. Some Indonesian Chinese claim this happened because Ahok was too arrogant or outspoken. The smarter ones see it for what it is – an attack upon the Chinese as a whole, an extremist persecution of a vulnerable minority.

At certain points in the history of both Malaysia and Indonesia, this resentment against the Chinese has burst forth into violence. On May 13th, 1969, a wave of anti-Chinese riots left nearly a thousand dead in Kuala Lumpur. According to Malaysian historian Kua Kia Soong, members of the majority Malay ethnic group were instigated into rioting by Abdul Razak Hussein, the current prime minister’s father, in a bid to seize power.

In Indonesia, the anti-Chinese riots of 1998 claimed the lives of over 2,000 people. Whipped-up by rabid imams and underhanded politicians like B. J. Habibie, and Adi Sasono, members of the majority pribumi ethnic group rampaged through Jakarta, Medan, and parts of Java, looting and burning Chinese shops and malls, butchering people, and gang raping over 150 women, almost all of whom were Chinese.

The specters of both race riots hang heavy over both countries, and in Malaysia certain Malay politicians, including the prime minister, frequently invoke their memories to threaten the Chinese community into keeping in line. Is it any wonder, then, that Southeast Asia’s Chinese diasporas are often anxious?

It’s hard to feel sympathy for tycoons who, in collusion with corrupt politicians, cut illegal deals to profit at their country’s expense. But two things should be noted. First, not all tycoons made their fortunes in such a way – some are just extremely enterprising, or hardworking, or fortunate, or a combination of the three. Second, the vast majority of Chinese are not very wealthy. The richest are obscenely rich, but most are far more ordinary: they are cooks and salesmen, teachers and accountants. Indeed, in rural parts of Malaysia and Indonesia, almost every small town has a Chinese-run general store, which is the lifeblood of the community, patronized by customers of all races. These people prosper in their own small way, and their contributions help to build their countries. They certainly don’t deserve the kind of backlash they regularly receive.

This backlash often ends up harming the countries in question too. In her great book, World on Fire: How Exporting Free Market Democracy Breeds Ethnic Hatred and Global Instability, Amy Chua of Yale Law School described how the race riots of 1998 cost Indonesia $40-$100 billion in capital flight, as the Chinese pulled their assets out of the country, plunging it into an economic crisis for years. When he took the presidency, Habibie expropriated the rice industry from Chinese businessmen and handed it over to pribumi cronies, who had no idea what to do with it. The result was a massive food crisis in which tens of millions of Indonesians starved. Similar nationalizations of other industries wrecked previously lucrative businesses, causing huge job losses. The tendency of Southeast Asian countries to persecute their vulnerable Chinese minorities is destructive to minority and majority alike.

China is in a unique position to address this issue. One should, of course, have no illusions about China. Its foreign policy is on the whole characterized by a ruthless amorality. Unlike the U.S., it is not known to take stands on principle, and certainly not principles like human rights. As such, its foreign policy is respected, but not admired. China is recognized as a great power, but seldom as a beacon of hope.

Chinese leaders have however expressed solidarity with Chinese diasporas across the world. In a recent series of speeches, Chinese Premier Li Keqiang called on overseas Chinese to help build the Belt and Road as they were part of the same “big Chinese family.” Xi Jinping declared it his mission to realize the “Chinese Dream,” which he defined as “the great rejuvenation of the Chinese race.” The term he used – zhonghua minzu – specifically referred to anyone of Chinese blood, no matter how long ago his or her ancestors left China.

What might such action look like? In April 2006, when anti-Chinese violence tore through Honiara, capital of the Solomon Islands, the Chinese government immediately airlifted out 312 ethnic Chinese.

Likewise, in September 2015, Jamal Yunos, a division chief of Malaysia’s ruling party and local rabble-rouser, planned to march a mob of Malay thugs into Kuala Lumpur’s Chinatown to intimidate Chinese vendors in order to avenge some imagined slight against “Malay dignity,” a mob that could easily have turned violent.

The day before the planned march, however, Dr Huang Huikang, China’s ambassador to Malaysia, visited the district himself.

“The Chinese government opposes terrorism and any form of discrimination against races and any form of extremism,” he said, standing by the gates of Chinatown with his wife and retinue. “But with regard to the infringement of China’s national interests, violations of legal rights and interests of Chinese citizens and businesses, which may damage the friendly relationship between China and the host country, we will not sit idly by,” he warned, in a show of solidarity with the Chinese vendors. “We will monitor the situation closely.”

It was a bold move, nobly done, breaking with China’s usual policy of non-intervention. The Malaysian Chinese, on the whole somewhat ambivalent towards Beijing, whose authoritarianism is often all too reminiscent of the Malaysian government’s, appreciated this gesture.

As its power in the region continues to grow, China will be in a stronger and stronger position to make such benign interventions. The Malaysian government is becoming increasingly dependent on China for bailouts and investment. China is Indonesia’s biggest trading partner, and its third-biggest source of foreign investment. If this power can be used responsibly, to curb the worst impulses of self-destructive ethno-nationalism, China can come to be perceived as a force for good in the world. It would earn the gratitude of overseas Chinese everywhere, and the admiration of the international community. This could be one aspect of its rise that is – in keeping with its rhetoric – benevolent.

How’s that for a soft-power boost?