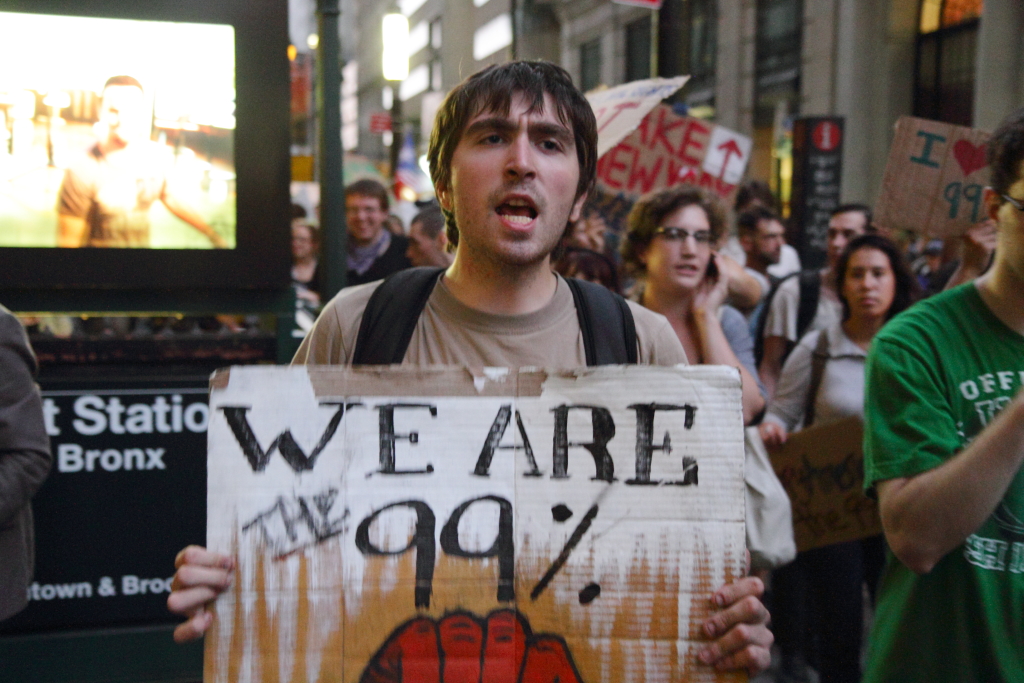 HONG KONG – Many blame today’s populist rebellion in the West on the far right, which has won votes by claiming to be responding to working-class grievances, while stoking fear and promoting polarization. But, in blaming leaders who have seized on popular anger, many overlook the power of that anger itself, which is aimed at elites whose wealth has skyrocketed in the last 30 years, while that of the middle and working classes has remained stagnant.

Two recent analyses get to the heart of the issues at play, particularly in the United States, but also in the rest of the world. In his new book Tailspin, the journalist Steven Brill argues that US institutions are no longer fit for purpose, because they protect only the few and leave the rest vulnerable to predatory behavior in the name of the free market. According to Brill, this is an upshot of America’s meritocracy: the best and brightest had the chance to climb to the top, but then essentially pulled the ladder up behind them, as they captured democratic institutions and used them to entrench special privileges for themselves.

The author Matthew Stewart agrees, arguing that, “the meritocratic class has mastered the old trick of consolidating wealth and passing privilege along at the expense of other people’s children.” Stewart shows that in the mid-1980s, the share of US wealth held by the bottom 90% of the population peaked at 35%; three decades later, they owned just 20%, with almost all of what they lost going to the top 0.1%. The 9.9% between these two groups – what Stewart calls the “new American aristocracy” – comprises what used to be called the middle class. In 1963, the 90% would have had to increase their wealth sixfold to reach the level of the 9.9%; by the 2010s, they would need 25 times their wealth to reach that level.

Much of the US population is working harder than ever, yet has suffered a decline in living standards, compounded by high levels of household debt and, in many cases, lack of health insurance. The top 10% have easy access to higher education that will enable their children to have the same privileges as them; the bottom 90% must work much harder to cover sky-high tuition fees, and typically graduate with a heavy debt burden. The top 10% receive first-rate medical care; the bottom 90% often do not, or must pay an exceptionally high price for it.

Taxation is supposed to level the playing field. But US Republicans have long pushed to lower taxes on the rich, arguing that lowering marginal tax rates will promote investment, employment, and economic growth, which will cause the wealth to “trickle down” to the rest of society. In fact, tax cuts for the rich merely further entrench their advantages, exacerbating inequality.

Making matters worse, the poor pay more indirect taxes (on land, real estate, and consumer goods), and the bottom 20% of the US population pays more than twice what the top 1% pays in state taxes. Add to that the challenges posed by automation and robotization, not to mention increasingly frequent and intense natural disasters, and it is not hard to see why so many people are so furious.

According to Stewart, the 9.9% is “the staff that runs the machine that funnels resources from the 90% to the 0.1%,” happily taking its “cut of the spoils.” But the inequality that this machine generates can have serious consequences, as it spurs social discontent and, as we are seeing in the US today, erratic policymaking. As the Austrian historian Walter Scheidel argues, inequality has historically been countered through war, revolution, state collapse, or natural disaster.

Avoiding such a dramatic event would require the 10% to do a much better job of advancing the interests of the 90%, in terms of income, wealth, welfare, and opportunities. Yet a combination of economic myopia and political polarization has led many instead to try to divert popular anger toward immigrants, China, and trade (including with close allies). As a result, the entire world is now caught in an escalating protectionist war that nobody will win.

It is true that, historically, internal contradictions and imbalances have often led to interstate conflict. But that is not inevitable. Rather, the outcome depends on the quality of leadership. In the US, for example, George Washington, Abraham Lincoln, and Franklin D. Roosevelt succeeded in strengthening their country because they recognized the need to address internal divisions in the light of America’s core values, global position, and long-term goals.

US President Donald Trump has exploited popular anger to advance his own interests. But he did not create that anger; America’s elites have spent decades doing that, creating the conditions for a figure like Trump to emerge. Now that Trump is in charge, the conditions of the 90% are set to deteriorate further. His approach to trade, in particular, will not only fail to help the people he purports to represent; it will also destroy the sense of fairness and stewardship that has historically bound the masses to their leaders.

Blaming outsiders is politically expedient. But the only way to “make America great again” is by addressing its internal injustices. No import tariff or border wall can do that.

US Economy
printTweet
You might also like
Back to Top
CHINA US Focus 2020 China-United States Exchange Foundation. All rights reserved.