Recently, China and the Association of Southeast Asian Nations (ASEAN) established a comprehensive strategic partnership, a new bilateral milestone. The future course of the post-Duterte Philippines is less clear.

Philippine elections will be held on May 9, 2022. Will Manila deepen its integration with the ASEAN and continue to recalibrate its ties between the U.S. and China? Or will it opt for U.S. ties, shun China and split the region?

However, the goal of the once-dominant pro-U.S. liberals is to tie Manila to the U.S.-led Indo-Pacific front and its military arm, Quadrilateral Security Dialogue (QUAD) - before the democratic vote.

The candidates, the polls

Recent surveys suggest ex-senator Ferdinand “Bongbong” Marcos dominates the presidential polls (57% of total), while Davao City mayor Sara Duterte-Carpio rules the vice-presidential campaign (54%) (see Figure 1). Marcos is the former governor of Ilocos Norte province and the only son of the controversial president Marcos (1965-86). Sara Duterte is the daughter of the incumbent president. He has a strong foothold in the north; she in the south; and both are very popular also in Metro Manila. 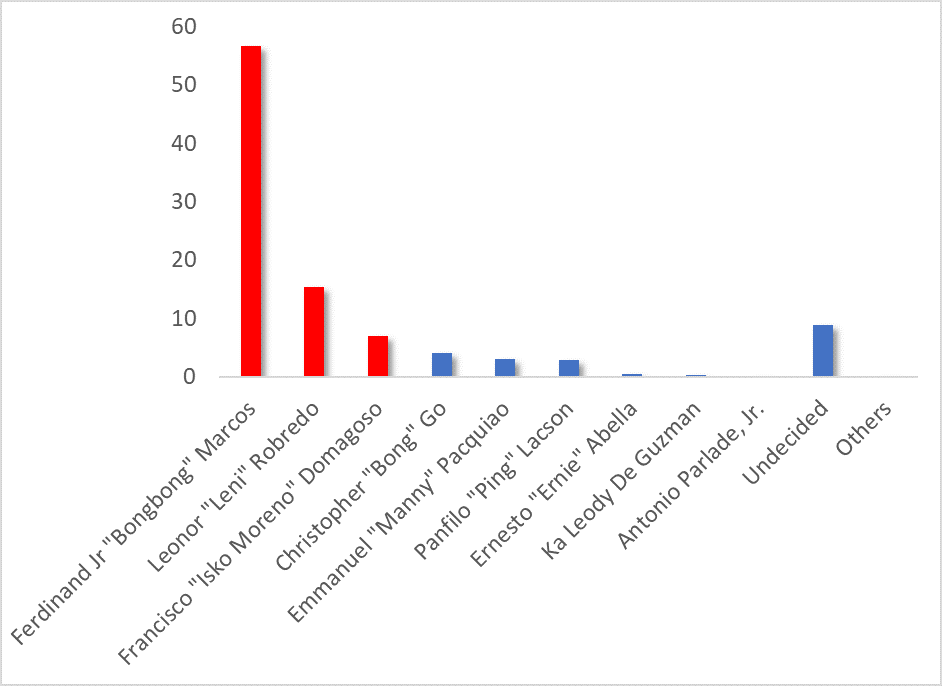 For almost two years, the aging Liberal Party (LP) stalwarts have promoted Leonor “Leni” Robredo (15%), the wife of a late liberal politician. The remaining candidates enjoy marginal support. Francisco Domagoso (7%), an ex-actor better known by his stage name “Isko Moreno,” is the mayor of Manila, with a relatively thin track-record as a public servant. Duterte loyalists claim he is funded by the country’s oligarchs.

Senator “Bong” Go (4%), president Duterte’s longtime right-hand, headed his cabinet staff. His track-record is strong, but he is relatively new in national politics. Manny Pacquiao (3%) is known for his world-class boxing career. As a senator, his track-record is weak and as a candidate, he doesn’t pull a punch. Ex-chief of national police Panfilo Lacson (3%) has made his career as an anti-corruption advocate, but enjoys little national support.

After their electoral meltdown in 2016, the LP no longer enjoys the support of the Filipino majority. But it is sponsored by the country’s wealthy and tacitly supported by the U.S.. In the coming months, these interests are likely to do what they can to destabilize the Marcos-Duterte lead and comparable alternatives.

During its three-decade reign until 2016, LP failed to initiate Philippine modernization. Every fourth Filipino lived in poverty and the gap between the rich and the poor remained steep. The share of the top-10% economic elite of the (pre-tax) national income actually increased until the late 1990s. And in 2016 it stayed where it had been in 1986. In this sense, the People Power Revolution left people without power.

Even today, the top-10% economic elite controls almost half of the national income, in which the bottom-50% have a share of less than 15% (Figure 2). In the Duterte era, income polarization began to fall, but the global pandemic has slowed the progress. 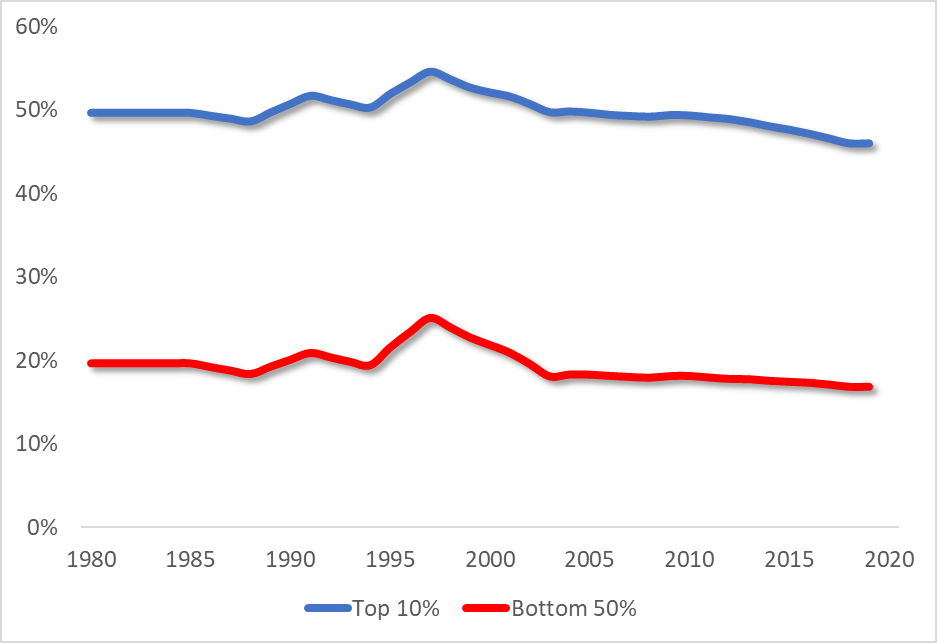 The liberal veterans support Robredo as the head of the anti-Duterte, “unified opposition” called 1Sambayan. The “pro-democracy” group is led by ex-Supreme Court Justice Antonio Carpio, the self-declared proponent of the “West Philippine Sea,” and former foreign secretary Albert Del Rosario, a wealthy businessman and the key player in the liberal pro-U.S. coalition.

In contrast, Bongbong Marcos and Sara Duterte would likely build on the Duterte legacy. Domestically, they hope to strengthen the economy after the severe pandemic recession. In foreign policy, they may try to continue to navigate between Chinese economic development and U.S. security assurances. The two stress Philippine interests in the South China Sea, and the importance of the ASEAN talks with China. The bilateral regional Code of Conduct (COC) is to be completed in 2022.

Hence, the frantic effort by Del Rosario and his troops to undermine the Marcos-Duterte ticket and bring Manila into the Indo-Pacific anti-China front, via increasing friction with China in the South China Sea.

These goals are fostered by Del Rosario’s “think-tank,” which serves as a political lobby. Organizationally, it is joined with its parent Stratbase, which is linked with Bower Group Asia, which has its connections with the Center for Strategic and International Studies (CSIS), a leading U.S. think-tank.

Months ago, ADRi pledged it would “make China the issue of 2022.” Hence, Del Rosario’s call on the Filipinos to “unite against Manchurian candidates,” such as Marcos and Duterte. His evidence? Marcos had met the Chinese ambassador. By such logic, whoever fosters U.S. and Chinese trade and investment must be a traitor.

Anti-China hyperbole fuels anti-Chinese Sinophobia. The more Robredo has trailed in the polls, she has resorted to anti-China rhetoric. Domasogo has embraced populism and racist street slang targeting ethnic Chinese and China. To raise his profile, Pacquaio has accused the president of giving in to the Chinese. Lacson pledges deeper U.S. military ties to look "tough" in orchestrated photo-ops.

It's all by the ADRi design. Peddling coded racism as patriotic duty is ugly, but sells in troubled times.

According to Del Rosario, his fight for the South China Sea is for the poor Filipino fishermen. Yet, he and his business associates could gain hugely from concession rights in the South China Sea. It was during Rosario’s government years that the Philippines filed the arbitration case against China. That was followed by the 2014 Enhanced Defense Cooperation Agreement (EDCA), which opened the country to U.S. military, ships, and planes; for the first time since 1991. A year later, Rosario met Obama’s then-deputy secretary of state Antony Blinken in Manila. 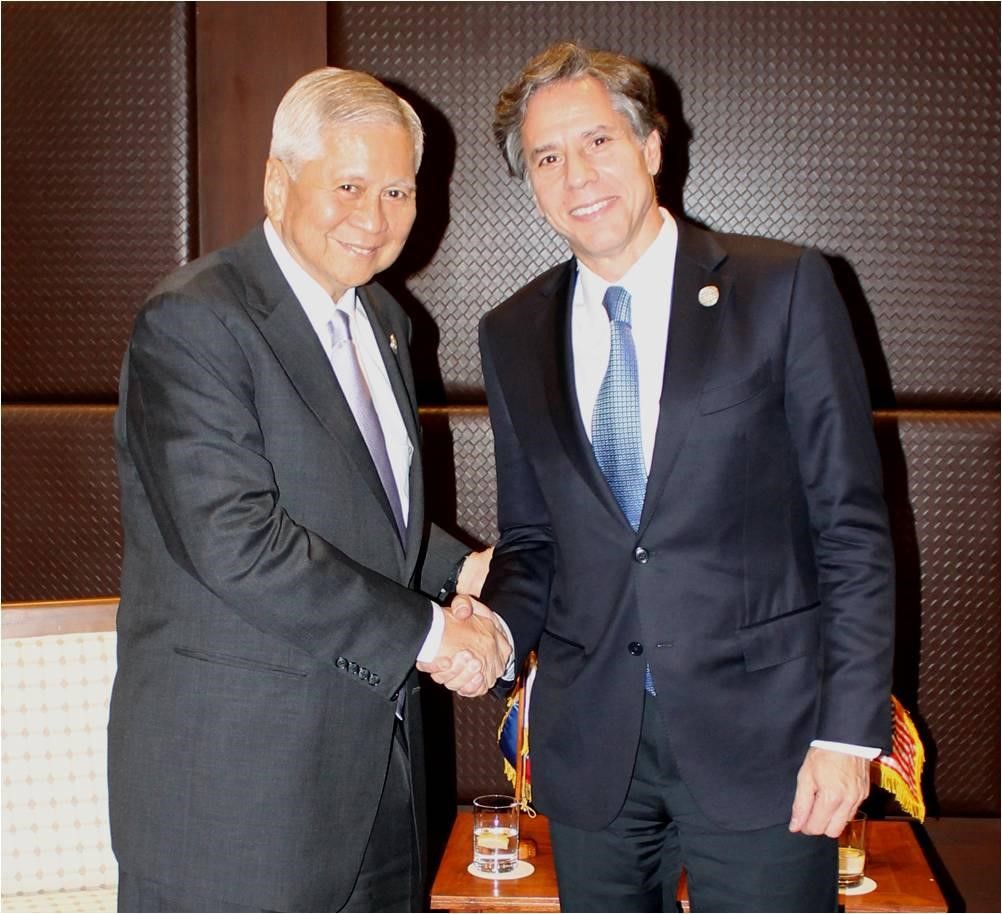 In 2016 President Duterte’s electoral triumph had caused a six-year pause in these plans. Today the U.S.-Philippines Visiting Forces Agreement (VFA) is back in effect, thanks to Del Rosario and a like-minded ally, Philippine foreign secretary Theodore Locsin, former alumni of Harvard Law, and U.S. ambassador Jose Romualdez, chairman of the Philippine offices of several U.S.-based multinational companies.

The strategic goal seems to be a series of hard-to-reverse military faits accompli with the U.S. before the 2022 election. First signs are promising.

In early summer, the defense secretaries of Japan and the Philippines agreed on “enhanced defense cooperation.” In October, the Philippines agreed to hold over 300 military activities with the U.S. in 2022. Foreign secretary Locsin welcomed the highly controversial U.S.-UK-Australia security pact (AUKUS), based on Canberra’s nuclear-powered submarines - even though such actions contradict the Southeast Asian Nuclear-Weapon-Free Zone Treaty (1995), the legally-binding Treaty on the Prohibition of Nuclear Weapons (2021) ratified by Philippines, and the Philippine Constitution.

Every Philippine presidential candidate has a full right to their own policy agendas. And only the Philippines can decide its own future. But the real question is whether that future will be driven by rearmament drives, which the liberal elites prefer or peaceful development that most Filipinos desire.

In Southeast Asia, the track-record of rearmament drives is dark, as evidenced by decades of devastation in the former Indochina not so long ago - and the U.S. post-9/11 wars since 2001 in Iraq, Afghanistan, Pakistan and Yemen.

Development and rising living standards require peace and diplomacy. Anything else will split Asia and effectively undermine the promise of the “Asian Century.”