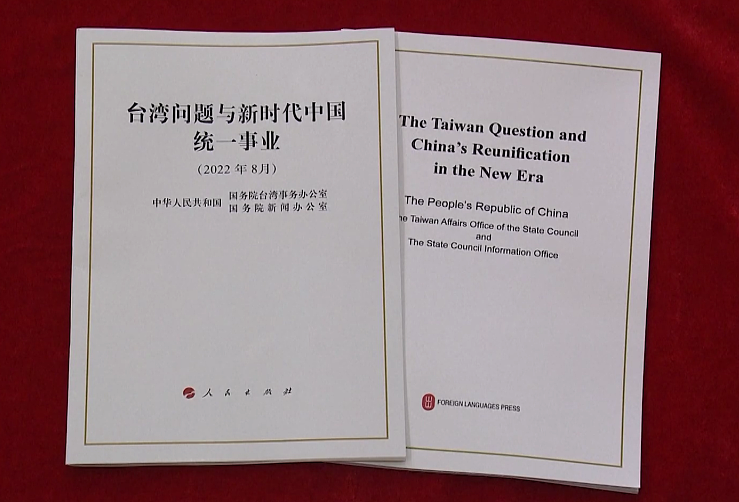 Each of these white papers functioned as both an explanation of national policy and a response to the situation in the Taiwan Strait. The first was published when the first Wang-Koo Talks ended and the situation was improving, but Taiwan’s authorities openly promoted the “participation in the United Nations” campaign. The second white paper was published when Lee Teng-hui dished out his “two states” statement shortly before Chen Shui-bian came to power. The latest white paper was published after U.S. House Speaker Nancy Pelosi’s visit to Taiwan and at the end of China’s military exercises in the Eastern Theater Command. Two points in the current paper are of particular interest:

• It mentions “a new starting point for reunification” for the first time.

In fact, even without Pelosi’s visit to Taiwan to stir up trouble, the situation in the Taiwan Strait has been troublesome in recent years. As the CPC is about to hold its 20th National Congress, it is necessary for the Chinese government to once again elaborate its position and policy and demonstrate its will and determination to promote unification. This can deter separatist elements advocating Taiwan independence, as well as external interference. And it can enhance the confidence of anti-independence forces on the island and overseas.

Five years ago, the political report of the 19th National Congress of the CPC officially declared that China had entered a new era, which is a historic starting point in its development. Over the past five years, in the face of increasingly complex Sino-U.S. relations and the situation in the strait, the Chinese government has responded calmly and concentrated its efforts on development and shoring up areas of weakness. It has fulfilled the First Centenary Goal of creating a moderately prosperous society in all respects as scheduled and embarked on a new journey toward the Second Centenary Goal of building China into a modern socialist country.

From standing upright to becoming prosperous and growing in strength, the Chinese government is firmly on a positive path. This marks a new starting point for reunification. While the new era comes with new theories and strategies, it also faces new problems and conflicts, so it needs new plans and guidance. The latest white paper can be regarded as a prelude to the systematic elaboration of China’s policy toward Taiwan at the CPC’s 20th National Congress.

• Reflecting new considerations with regard to “one country, two systems”

The white paper reiterates the basic policy of peaceful reunification with Taiwan and a "one country, two systems” approach.  One country, two systems is an institutional innovation that addresses the coexistence of different social structures and ideologies while unifying one country as a whole. It was first proposed for solving the Taiwan question, but was put into practice in Hong Kong.

In the 25 years of practice in Hong Kong, the concept has experienced storms and hardships, but in recent years it has helped achieve a major turnaround from chaos to stability, enabling the special administrative region to enter an important period of prosperity. The practice of Hong Kong and Macao for more than 20 years has proved that ‘one country, two systems’ has strong vitality and is a workable solution and an achievable goal welcomed by the people.

With the practical experience of Hong Kong and Macao, the Chinese government has more confidence in the implementation of the concept in Taiwan after peaceful reunification. Although some political forces in Taiwan refuse to accept one country, two systems and continue to misinterpret and discredit it, the fact that Hong Kong and Macao have developed is indisputable.

For the first time, the new white paper draws on the practice of one country, two systems in Hong Kong to explain the policy of peaceful reunification for Taiwan, demonstrating the Chinese government’s determination to adhere to the concept in the long run and ensure its sustained and steady progress.

The white paper also points out for the first time that the Chinese government firmly believes that compatriots in Taiwan will develop a better understanding of one country, two systems. This includes a better understanding of the concepts of peace, democracy, goodwill and win-win, so that Taiwan people will actively participate in cross-strait communication, dialogue and democratic consultation, and contribute their wisdom and strength to the two-systems solution of the Taiwan question.

In addition, compared with the previous two white papers, some of the contents of the new one have been repeated, but there is always something new in them. They show that the Chinese government is determined to promote reunification in different contexts.

1. Adhering to the basic policy of peaceful reunification and the one country, two systems concept

2. Opposing all forms of Taiwan independence secessionist activity and interference by external forces

The white paper mentions that actions of Democratic Progressive Party authorities are obstacles that must be removed in advancing the process of peaceful reunification. Without the fiddling of agitators for independence and the interference of external entities, China’s road to peaceful reunification would not have had so many twists and turns.

The terms “exchanges and cooperation,” “peaceful development” and “integrated development” are used by central authorities in reference to the deepening process of cross-strait relations. In pursuing integrated development of relations in the new era, China will learn from the lessons of Hong Kong — for example, that “territories and people’s hearts did not return at the same time.” It sees the need to promote integration through increased links, benefits and understanding, and to start the work of ensuring that people’s hearts return early by building a cross-strait integrated development demonstration zone as part of a good foundation for the peaceful reunification of the nation.

TaiwanOne-China PrincipleNational Defense PolicyNational Security
printTweet
You might also like
Back to Top
CHINA US Focus 2023 China-United States Exchange Foundation. All rights reserved.