Cleaning up: Debt Reduction for the Local Government 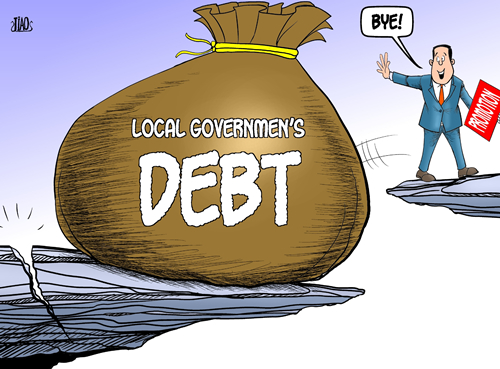 The central government affirmed its commitment to reducing financial risks in December 2017. There have been many risks to address in recent years, including shadow banking risks and state enterprise indebtedness, which have created challenges in allocating funds and innovation for any single area. However, local governments have found themselves in great financial trouble, as they have insufficient revenue to cover their debts. Since they are at the heart of China's policy transmission scheme, they must remain financially viable in order to continue to implement government policy. Therefore, they require major focus.

China's central government has already sent officials to 15 provincial governments to take on the challenge of reducing debt despite stagnant growth in some regions. For example, Tan Jiong, a vice-president of the Industrial and Commercial Bank of China; Li Bo, former chief of the central bank’s monetary policy department; and Ge Haijiao, the former president of China Everbright Bank, have all been appointed to top provincial-level government positions. With many years of financial experience, these officials are considered the best candidates to address the insidious debt issue.

The outlook for local government financials is not positive. So far, over one third of China's provinces have not met growth targets this year. Many of the provinces experiencing slow growth are those poorer regions that have been left behind. This means that local governments will continue to have relatively low levels of revenue while under a massive debt overhang.

The trade war with the US hasn't helped. Local governments took responsibility for maintaining employment in the face of the trade war by boosting business tax cuts and ramping up infrastructure spending once again. This was funded by the sale of municipal bonds. The scale of municipal bond debt has risen massively from $34 billion in 2017 to $183 billion in 2019. Supply has mounted while demand for municipal debt has declined. It seems likely that state-related entities will be forced to hold municipal debt if market demand is insufficient, but this will only exacerbate the drag on growth.

Short-run challenges may create yet another stumbling block for local governments. Most ominous is the fact that local government municipal debt matures in 2020. This debt load amounts to $283 billion. Circumstances under which local governments took on the debt are not much different from the current situation, meaning that there are few to no sources of new growth. Although the central government has canceled a scheduled decrease in revenue sharing to local governments, the local government fiscal burden is high.

The local government debt burden is likely to persist due to the overall revenue shortfall and high debt loads faced by local governments. Something has to give, whether it is debt repayments, maintaining full employment, or buoying GDP. It may take more than a financial expert to get local governments on the track to fiscal sustainability once and for all.

Government Debt
printTweet
You might also like
Back to Top
CHINA US Focus 2021 China-United States Exchange Foundation. All rights reserved.