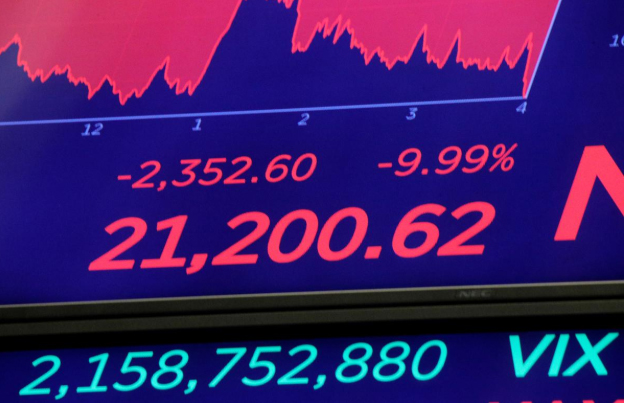 The Dow Jones Industrial Average is displayed after the closing bell on the floor of the New York Stock Exchange (NYSE) in New York on March 11, 2020. The market has reacted to recent unpredictability with large drops, triggering a market wide circuit breaker four times in March.

Global financial markets woke up during March to the far-reaching economic consequences of the latest coronavirus (COVID-19) epidemic spreading from China to the rest of the world. The impact is magnified by the already precarious nature of a debt-stretched boom that was running out of steam.

Modern economies are lubricated by extensive debt, all the more so the longer an economic boom continues. Asset prices, including stock and real estate prices, are pushed up by more and more credit issued to speculators gambling that prices will continue to climb. When economies begin to slow and credit tighten, there is often little chance for a “soft landing,” i.e., limiting the downturn. Many asset owners are heavily debt leveraged. If prices plateau, they must either sell quickly to liquidate loans and cut their losses or hold on, perhaps doubling down with even more borrowing, hoping price declines are temporary. Bearish sellers push prices even lower while bulls trying to hold out for better times will panic if declines continue. Many hang on to falling assets for too long, bankrupting themselves and defaulting on their loans. As more and more loan assets filling bank portfolios vanish, the most over-extended financial companies face bankruptcy as well, along with many of those depending on new credit from increasingly skittish lenders.

Debt-strapped economies may not be able to slow down gradually like turning down the heat or landing a plane. Average conditions do not matter. What matters is the panic at the extremes of leverage that leads economies into deep slumps at the end of a business cycle. We seem to be there now.

Typically, near the end of a business cycle interest rates are fairly high as the demand for credit soars, so if central banks lower rates and inject enough liquidity into the credit system (often falsely called “printing money”), a deep crash might be averted and a soft landing secured. That is standard theory among central bankers. But the problem this time is that interest rates are already at extraordinary record lows. Yields on U.S. 10-year Treasury bonds fell for the first time ever below one percent to 0.5%. Yields are even lower on much of Japanese and Euro sovereign debt, some even negative. Investors, mostly financial institutions, are in effect paying governments for the privilege of lending them funds. This cannot get much weirder.

The nature of this coronavirus suggests that this is not just a short-term shock. Carriers of the virus do not have to appear sick to be able to spread it. By the time they appear sick they could already have infected hundreds. Quarantines will often come too late. Containing it is much harder than with typical flu viruses. Thus, even as the number of confirmed cases climbs close to 200,000 worldwide, true numbers are likely to be very much higher already because most newly-infected carriers are not yet showing symptoms. More than 7,000 have already died from the flu-like disease, although the vast majority recover. So far the majority of those afflicted are in China, but it is still spreading fast. The economic consequences have already been substantial, but they are likely to get much worse. So far there is no vaccine or cure. Contrary to rumors on the internet, there is also no assurance that warmer weather will slow the spread much. In any case, the southern hemisphere has opposite weather.

Among the first heavily impacted is the global travel and tourism industry. The initial effect was mostly confined to China, but now it is spreading around the globe. All sorts of non-essential travel and public meetings are being canceled worldwide. Petroleum prices are falling on expectations of a global slump led by much reduced travel. All sorts of companies that borrowed on the expectation of thriving business will be struggling to meet debt payments.

The virus is likely to illuminate the weaknesses of public health systems. The widespread lack of health insurance among the working poor in the U.S. may be among the biggest problems. Low-paid, uninsured workers are less likely to get tested and more likely to go to work sick because they often lack benefits like paid sick leave. Many such workers are employed in service industries where they spread to virus widely if infected, including senior care, day care, food service, beauty salons, and cleaning homes and commercial buildings. While countries with efficient public health services and universal insurance, such as South Korea, are providing widespread free testing to quickly identify and hopefully contain the spread of the virus, the U.S. with its patchwork of private insurance and large underclass of uninsured and vulnerable workers, is likely to be hit much harder as the pandemic spreads covertly. This virus may awaken more Americans to the public benefits of universal health insurance.

The impact to the Chinese economy is already enormous. Travel bans and virus fears have stranded tens of millions of migrant workers in their hometowns even when their factories, construction sites and service industries do finally reopen after the government’s weeks-long extension of the Chinese New Year holiday, which was underway when the virus first became widely known. Nearly all Chinese universities will be closed for months as students try to learn online lessons from home. Food delivery services are booming while many restaurants remain closed for on-site meals. Gas stations are starting to sell groceries because many shoppers prefer to avoid crowded markets. Public places are unusually deserted all over China. The sort of extensive shutdown is now spreading worldwide along with the virus.

The U.S.-China interim trade agreement, which was supposed to be a step toward solving the Trump-imposed trade war, is already effectively a dead letter. Trump gave China temporary relief from any new tariffs and cut most of the extraordinary new tariffs on consumer goods from 15% to 7.5%, although leaving in place 25% tariffs on about half of all Chinese exports to the U.S. In return, China promised to buy much more from the U.S., as much as $200 billion over the next two years. This target was always wildly unrealistic. The virus-induced decline of the Chinese economy gives China a ready excuse to eventually renege on the agreement, although it could not have avoided it anyway. Trump wants to pretend he has solved the trade problem with China in order to boost his re-election chances, but whenever either the U.S. or China chooses to recognize the partial agreement is already dead, he may retaliate once again with further tariffs. Trump may also use the Chinese origin of the virus as an excuse to further restrict travel and immigration from China. All in all, this pandemic bodes ill for the global economy as well as U.S.-China relations and Trump’s re-election.

Financial CrisisCOVID-19
printTweet
You might also like
Back to Top
CHINA US Focus 2020 China-United States Exchange Foundation. All rights reserved.