Immediately following the Beijing Winter Olympics, China’s leadership will accelerate its preparations for the 20th Party Congress scheduled for this fall. China watchers around the world recognize the significance of this once-every-five-year event, which will shape Beijing’s socioeconomic policies and political trajectory. The preceding report in this series also illustrates that approximately two-thirds of the members of the 20th Central Committee (CC), who include 350-400 of the most important Chinese civilian and military leaders, are expected to be newcomers.

Less understood in the overseas China watching community, however, are the actual procedures and mechanisms behind elite turnover. What are the concrete steps taken to select delegates for the Party congress and important factors that may determine outcomes? A clear understanding of the inner workings of the organizational hierarchy of the Chinese Communist Party (CCP) — including the regulations and norms (both old and new) of elite circulation and key leaders who oversee the process— is vital to arrive at a well-grounded assessment of this upcoming leadership change.

As was the case for previous Party congresses, official preparation for the event usually includes two main domains –– ideological and personnel. This essay will primarily discuss the personnel domain, especially the procedures and selection of delegates for the 20th Party Congress. A later essay in this series will address the ideological narrative and policy discourse on the eve of the upcoming congress. But it is worthwhile to provide a brief overview of the anticipated ideological preparations for this important event.

Following the long tradition of the CCP’s emphasis on political indoctrination, the Politburo Standing Committee (PSC) has routinely established “a Party congress document drafting group,” usually led by the incumbent general secretary or general secretary designee, roughly a year prior to the congress. The primary objective of the group is to draft the formal report of the Party congress and other principal documents, including the revised Party Constitution if it was amended at the congress, as well as other communiques and resolutions.

These documents will set the framework for the Party’s ideological tone, overall political orientation and governing measures, specific socioeconomic policies, and strategic approach to foreign relations for years to come. The composition of the drafting group for the 20th Party Congress has not been publicly announced yet. For the document drafting group of the 18th Party congress, incoming General Secretary of the Party Xi Jinping served as the head of the group, and incoming Premier Li Keqiang and then Politburo member and propaganda chief Liu Yunshan served as deputy heads. The group also included representatives of the key leadership apparatus. In addition, a large number of Party theoreticians, functionalists, and policy specialists also participated in the drafting of various documents through their work in as many as 38 affiliated research groups.

More recently, in March 2021, the Politburo established a document drafting group focused on assembling the “major achievements and historical experience of the CCP’s century-long endeavors.” Xi Jinping served as the head of the group and two current PSC members, Wang Huning (1955) and Zhao Leji (1957), served as deputy heads. This might suggest that Wang and Zhao will play key roles under Xi Jinping’s leadership of the 20th Party Congress document drafting group.

Members of this group will likely include current Director of the Central Propaganda Department Huang Kunming (1956), Executive Vice President of the Central Party School Li Shulei (1964), and Director of the Policy Research Office Jiang Jinquan (1959). While Huang is currently a Politburo member, Li and Jiang will likely enter the next Politburo and/or the Secretariat –– a crucial seven-member leadership body that manages the Party’s daily business and administrative matters. They will likely be among the most important leaders focused on ideological work in Xi’s third term.

Without a doubt, personnel matters are more important. An overarching group, the Preparatory Group for the 20th Party Congress, will oversee the selection of delegates for both the congress and members of the new CC. The composition of this critically important group is usually not announced publicly. But according to non-official Chinese sources, the Preparatory Group for the 19th Party Congress was headed by Xi Jinping and a few deputies, including then PSC members Li Keqiang, Zhang Dejiang, Liu Yunshan, and Wang Qishan, as well as then-Central Military Commission Executive Vice Chairman Fan Changlong.

Based on the composition of the group for the previous Party congress, one can reasonably speculate that NPC Chairman Li Zhanshu (1950), Executive Secretary of the Secretariat Wang Huning, Director of CC General Office Ding Xuexiang (1962), and Director of the Central Organization Department Chen Xi (1953) will be influential members of the next preparatory group. Like the previous group, some of them will likely retire after the 20th Party Congress, and some will remain in the top Party leadership.

CCP demographics on the eve of the 20th Party Congress

In June 2021, as part of preparations for the 20th Party Congress, the Central Organization Department (COD) released statistics outlining the demographics of the CCP. There are currently 95.2 million CCP members, including 27.5 million female members (accounting for 28.8 percent of the total). Around 49.5 million members have a two-year college degree or above (accounting for 52 percent); around one quarter (24.9 percent) are under 35 years old; and the majority are Han Chinese (92.5 percent). Between January 2020 and June 2021, the CCP recruited 4.7 million new members, 80.7 percent of whom were under 35 years old. About 2.2 million new members hold a two-year college degree or above, and about 1.9 million are currently students, who constitute the largest occupational group among new recruits.

Chart 1 shows the occupations of CCP members. Compared to the 2013 data, there have been drops in the number of workers (from 8.5 percent to 6.8 percent) and farmers, herders, and fisherfolk (from 29.8 percent to 27.1 percent). Meanwhile, there has been increases in managerial, professional, and technical staff in enterprises and public institutions (from 23.7 percent to 27 percent) and retirees (from 18.3 percent to 20.1 percent). 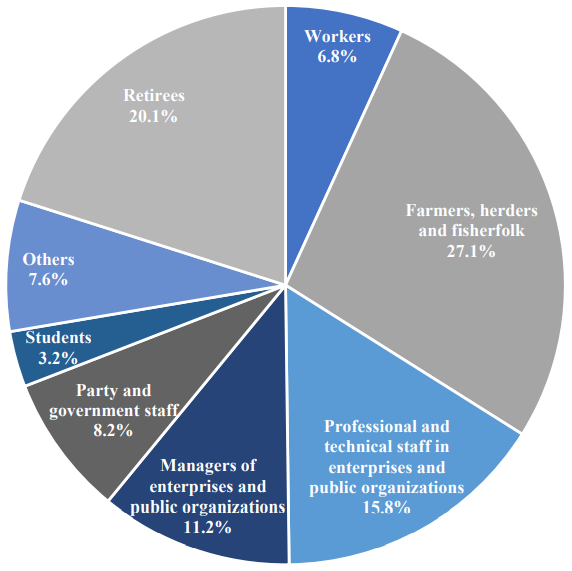 Presently, the CCP has 4.86 million grassroots organizations, of which 273,000 are categorized as grassroots Party committees (jiceng dangwei). According to the COD, these grassroots Party committees, as well as the Party leadership at all local levels (i.e., province, municipality, county, and town), are required to undertake generational reshuffling of their Party committees (dangwei huanjie) roughly within the year prior to the 20th Party Congress. This involves substantial leadership changes in China’s 31 provinces and province-level municipalities; 397 prefecture-level cities; 2,771 county-level cities that include counties and city districts; and 38,617 towns and urban subdistricts. Not surprisingly, the year leading up to the Party congress is seen as a major political season in China.

The formation of delegations for the 20th Party Congress

The 6th Plenary Session of the 19th CC also decided that 38 delegations will be formed (in contrast to the 40 delegations that attended the 19th Party Congress). Apparently, the Central Working Committee of Hong Kong Delegation and the Central Working Committee of Macau Delegation have been excluded from this Party congress, and Party representatives of these two regions will likely be part of the delegation from Guangdong Province. The number of delegates in a given delegation is determined primarily by the constituency’s number of CCP members and grassroots organizations, but it also tends to be aligned with the number of delegates who attended previous Party congresses.

Chart 2, which is largely based on the number of delegates in various delegations to the 19th Party Congress, provides detailed information about the (likely similar) distribution of delegates for the upcoming congress. Thirty-one province-level delegations occupy roughly 69 percent of the total number of delegates, with Shandong, Shanghai, Sichuan, Jiangsu, and Guangdong being the largest. The delegations of the People’s Liberation Army and central government ministers and commissions have large representations of about 11 percent and 8 percent, respectively.

Chart 2: Distribution of delegates to the Party Congress (based on the recent party congresses) 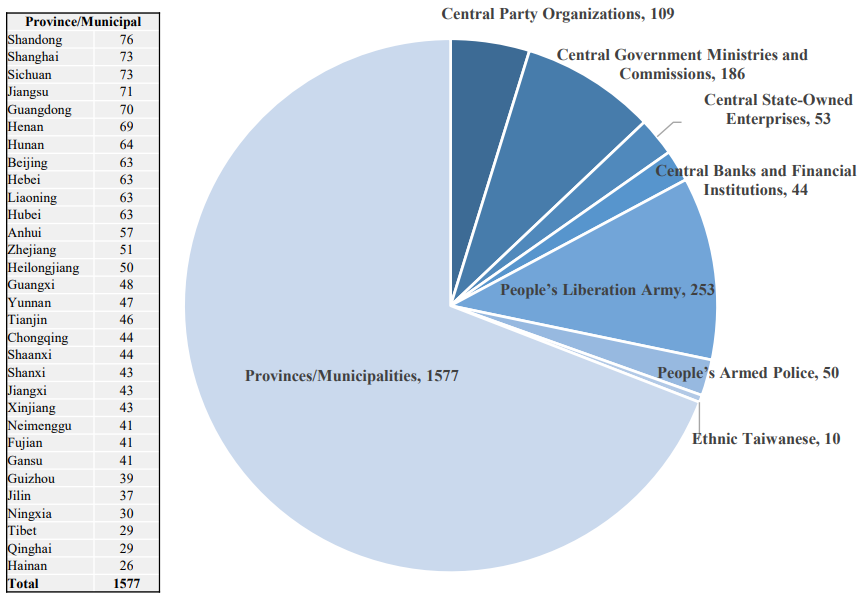 Delegates are supposed to be elected in their constituencies. The COD also requires that the proportion of Party members on the front line of production and work generally should not be less than one-third of the membership in a delegation. But at the same time, as was the case at previous Party congresses, top Party leaders (PSC and Politburo members) will be “elected” from the designated province-level delegations. For example, at the 19th Party Congress, Xi Jinping was in the Guizhou delegation, Li Keqiang in the Guangxi delegation, Wang Huning in the Hainan delegation, and Zhao Leji in the Heilongjiang delegation. There was hardly any explanation provided for why these top leaders were assigned to be delegates from these provinces.

According to the press release issued by the COD in November 2021, the process for selecting delegates consists of the following five steps:

● 3) Selection of preliminary candidates. The standing committees at the delegation-level Party committee meet to decide the preliminary list of candidates in their constituency.

● 4) Decision of candidates for the ballot. The full committees at the delegation-level Party committee vote to decide which candidates will appear on the ballot.

Prior to the 20th Party Congress, the Qualification Review Committee of the congress will conduct the final vetting of the candidates in terms of qualifications and credentials. Some of the measures allowing for more collective decision-making and transparency in the previous Party congress have been abolished for the upcoming Party congress, including the use of secret votes for candidates by the full committee of the delegation-level administration and the public announcement of the list of delegate candidates.

These procedures and mechanisms should be seen only as theoretical. In reality, the whole process is strictly controlled by the COD. Nevertheless, critics and analysts, including those engaging on China’s dynamic social media platforms, can observe ––even critically, whenever possible –– these official plans and glean important information about the distribution of power among various stakeholders and competing regions in the country.

While these wide-ranging efforts to prepare for the Party congress in the ideological and personnel domains lay the groundwork for the proceedings and foreshadow how the congress will play out this fall, the Party also confronts many challenges at home and abroad, any of which could affect the best laid plans. These challenges will be unpacked in the next essay.