Nothing can better forecast the composition of the upcoming 20th Party Congress’ new Central Committee and other integral leadership bodies than the present configuration of China’s 31 province-level Party committees. This is not only because top officials in provincial administrations are often leading candidates for national offices, as discussed in this series’ last article, but also because provincial Party committees are presently undergoing extensive reshuffling.

The reappointments and new promotions of provincial leaders are often a prelude to the jockeying for national offices in Beijing. Examining empirical information regarding both the overall status of the provincial chiefs (Party secretaries, governors, and mayors) in all local administrations as well as the outcomes of the new composition of the provincial Party standing committees in 14 provinces yields two interesting findings. First, the current high fluidity rate –– or short tenure –– of provincial chiefs is unprecedented. Second, the different ranks of provincial Party committee members fall into distinct age echelons.

The various leadership levels of the Chinese Communist Party (CCP) have maintained a high turnover rate during the past three decades. This trend has long been widely noticed in the overseas China watching community. For some analysts, the injection of new blood into the CCP leadership highlights the fluidity of Chinese officialdom and helps explain the survival of this long-standing ruling party. For others, the rapid turnover of CCP elites reflects dynamic changes in factional politics in the Chinese political system. Yet, the rapid circulation –– and resulting short tenure –– of provincial chiefs in the year leading up to the 20th Party Congress has truly been unprecedented.

The acceleration of change in province-level leadership during the two recent junctures (2013 and 2016) transpired during Xi Jinping’s sweeping anti-corruption campaign, which most notably resulted in the fall of heavy-weight political leaders Zhou Yongkang, Bo Xilai, and Ling Jihua as well as the early retirement and purges of multiple provincial chiefs. Following the 19th Party Congress in 2017, Xi’s confidants and trusted followers have assumed the top two positions in the country’s most important cities and provinces, notably Beijing, Shanghai, Chongqing, Guangdong, Zhejiang, and Hebei.

Overall, provincial leaders have always been well represented on the CC. For example, of the 371 full and alternate members of the 17th Central Committee formed in 2007, 154 were local leaders, including 62 provincial chiefs, 62 deputy provincial leaders, and 30 municipal or prefecture-level leaders. Collectively, these 154 members formed the largest constituent group (41.5 percent) in the 17th CC, compared with only 84 members (22.6 percent) from government ministries, 65 (17.5 percent) from the military, 46 (12.4 percent) from prominent organizations, enterprises, educational institutions as well as other functional groupings, and just 22 (5.9 percent) from central Party organizations.

Among the many distinct collective characteristics of current provincial chiefs (some of which will be discussed later in this series), those that stand out unambiguously are the prevalence of leaders who advanced their careers in Fujian, Zhejiang, and Shanghai –– all regions where Xi served as a provincial chief. They include 12 province-level Party secretaries and seven governors/mayors. Most of them are Xi’s long-time trusted associates, and some will likely play even more prominent roles in Xi’s third term.

Xi’s proteges belong to an array of different age cohorts. For example, several current Politburo members born in the late 1950s will be among the top candidates for the next PSC. A few from the post-1960s generation will likely enter the Politburo, and those who were born in the late 1960s are well-positioned, based partially on their leadership credentials, to be promoted in the next five years. As for the average age distribution of provincial chiefs, except for one governor (Ningxia Governor Xian Hui, 1958), all were born in the 1960s; 17 Party secretaries were also born in the 1960s. Altogether, 47 (76 percent) provincial chiefs are from the post-60s generation.

The first phase of reshuffling 14 provincial Party standing committees last fall appointed 182 members with an average of 13 members per province. Two province-level administrations (Xinjiang and Tibet) have 15 members each. Eight provinces (Henan, Jiangxi, Guangxi, Hebei, Fujian, Hunan, Inner Mongolia, and Liaoning) each have 13 members, and the other four provinces (Anhui, Shanxi, Jiangsu, and Yunnan) each have 12 members. This membership number correlates with the targeted range of 11 to 13 members with the exception of two minority regions (Xinjiang and Tibet), as explicitly specified in The Regulations on the Work of Local Committees of the Chinese Communist Party issued in December 2015.

In 2020, there were 407 members total in all 31 provincial Party standing committee members. Some Beijing-based researchers consider this group of political elites to be the most prominent pool of candidates for national leadership. In a recently published report, these researchers found that approximately two-thirds of the non-military members of the 18th CC had significant leadership experience as members of the provincial Party standing committee.

The members of the standing committees are not equal in terms of political status; some are more powerful –– and more senior in both rank and age –– than others. An analysis of 182 members of these 14 reshuffled committees shows the distinct age echelons. Chart 1 regroups all these members into five levels of political status and five age cohorts. The distribution not only reflects the official scheme for generational succession at this level of leadership, but also indicates that age has remained a crucial factor in determining appointments and retirement. 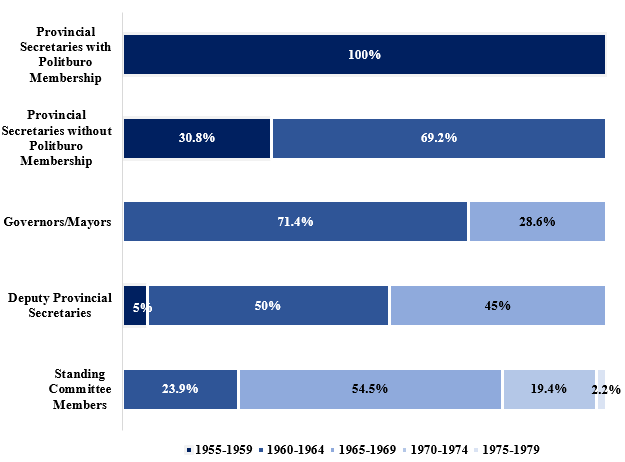 Source: Websites of the Xinhua News Agency and Renmin Ribao (People’s Daily). The data were acquired and tabulated by Cheng Li.

Based on CCP regulations in the post-Deng era, officials above a certain level of leadership cannot exceed a set age. For example, any provincial chief (except Politburo members or ethnic minority leaders) and any cabinet minister (except for those concurrently serving as state councilors) whose age exceeds 65 must step down. Additionally, any deputy provincial leader older than 63 does not qualify for reappointment. Evidently, these regulations still apply to the current provincial leadership with the exception of Inner Mongolia Party Secretary Shi Taifeng (1956).

Chart 1 shows that the 1960-1964 age cohort accounts for 69 percent of provincial Party secretaries, 71 percent of governors/mayors, and half of the deputy Party secretaries. Overall, the post-1960s generation has already dominated the top provincial leadership positions. This age cohort, however, accounts for less than a quarter (23.9 percent) in the bottom tier –– the group of provincial standing committee members. Instead, the younger cohorts dominate that group –– 54.5 percent are in the 1965-1969 age cohort and 21.6 percent belong to the post-1970s generation. Among the newly appointed members in the provincial Party standing committees that completed reshuffling last fall, one-third of them are leaders from the post-1970s generation.

More than 40 post-1970s generation leaders nationwide currently serve in the provincial Party standing committees, even though more than half of the provincial standing committees have yet to undergo reshuffling, which is expected in the next few months. An orderly power transition to younger leaders is crucial for a country in which the institutionalized selection of political leaders is neither transparent nor determined through democratic elections.

There is little doubt that today’s provincial chiefs will be among tomorrow’s national decision-makers. As a group, the post-1960s generation of leaders will rule China for most of this decade and beyond. It may still take a long time for the post-1970s generation to emerge on the center stage of Chinese politics. But it is also perhaps not too early for China watchers overseas to observe and analyze the characteristics of the post-1960s and the post 1970s cohorts, especially how they differ from Xi’s post-1950s generation. The following articles will address this important subject.