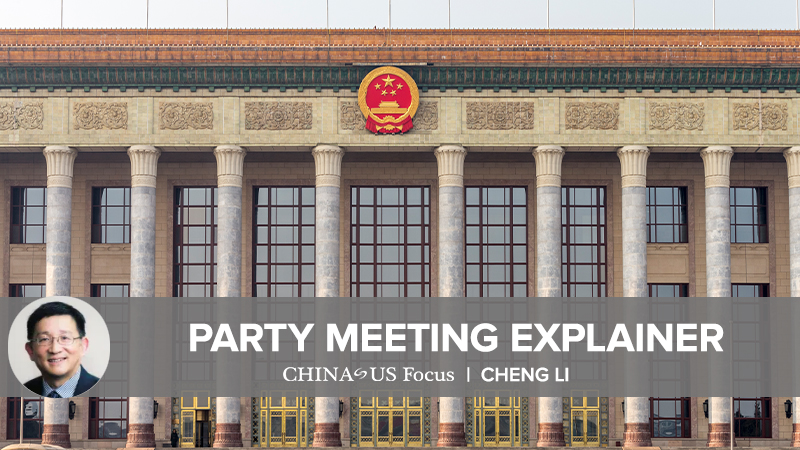 Birthplace Distribution of Central Committee Members in the Xi Era

Birthplace has always been an important source of identity in China given the expansive geography and cultural diversity of the country. Birthplace-based association (tongxiang) among political elites has traditionally been a driving factor in the competition for power and influence in the central government. During the past four decades, local leaders at various levels (township, county, prefecture, municipality, and province) have usually been selected from the same localities with the exception of a few top posts. While local officials demand greater regional autonomy in socioeconomic development, including selecting the local leaders who are familiar with their turf, the central authorities have more frequently reshuffled top provincial and municipal chiefs.

Top leaders in Zhongnanhai must often reconcile two seemingly contradictory needs –– sustaining strategic priority areas at the base of their ascension to the pinnacle of power and addressing the growing demand for a more representative leadership and a more balanced regional development agenda. These observations highlight the relevance of the demographic composition of the native provinces of the Chinese political elite. The presentation of the birthplace distribution of Central Committee (CC) members in the Xi Jinping era in this article can shed valuable light on this inquiry on the eve of the 20th Party Congress.

Over the last century, the Chinese national leadership often disproportionately recruited elites from certain geographic regions that were perceived to be important in each period. When Sun Yat-sen, a Cantonese native, founded the Republic of China after the Revolution of 1911, his fellow Cantonese, especially those who attended the Whampoa Military Academy in Guangzhou, comprised a significant portion of the political and military elite during the first couple of decades of the Republic. Similarly, when Chiang Kai-shek controlled the nationalist government in the 1930s and 1940s, his fellow Zhejiang Province natives occupied some of the most important posts in the government, including military and intelligence operations.

As for the Chinese Communist Party (CCP) cadres, most veteran leaders, known as “Long Marchers,” came from central China –– Hunan and Hubei provinces, in particular. This geographic orientation was mainly a result of the origins of the Chinese Communist movement in the 1920s and 1930s, as initial support came from peasants in these areas. Many peasants-turned-revolutionary soldiers later became national leaders of the newly founded People’s Republic of China (PRC). Approximately 41 percent of the members of the Eighth Politburo of the CCP formed in 1956 were born in Hunan, and about one-third (33 percent) of the members of the Ninth Politburo in 1969 were born in Hubei. Altogether, leaders from provinces in central China occupied more than half of the Politburo seats in each of these two Party Congresses (59 percent and 52 percent, respectively).

The “gang of four” (sirenbang) leaders who came to prominence in the 1960s and 1970s, especially toward the end of the Cultural Revolution, were largely from Shanghai. They wielded enormous power and influence over the country in the final years of the Mao era, when they promoted many fellow Shanghai natives to important positions.

Since the Deng era, China’s national leaders have often accrued experience by working in provincial-level administrations for extended tours of duty as provincial or municipal chiefs. In general, provincial and municipal chief positions have carried much more political weight since the mid-1980s compared to the first three decades of the PRC. The qualifications for leadership positions at the provincial and national levels have shifted from revolutionary credentials, such as participation in the Long March and the Anti-Japanese War, to economic management experience and other administrative skills, especially at the local leadership level. This change, in turn, has also made reform-era leaders far more focused on advancing the socioeconomic performance of their own jurisdictions than ever before.

Under the leadership of both Jiang Zemin and Hu Jintao, China experienced disproportionate representation of leaders from the east coast, with large contingents hailing from Shandong and Jiangsu provinces. On the 15th CC in 1997, about 45 percent of full members were born in eastern China. According to a study of military elites in the 1990s, well over one-quarter of high-ranking officers in the People’s Liberation Army (PLA) came from Shandong Province, and altogether 52 percent of China’s top military officers were from eastern China.

The strong representation of Shandong natives in China’s senior military leadership in the 1990s might be attributed to the fact that many Shandong guerrillas joined the PLA in the late 1940s and then became top officers some forty years later. Yet, the predominance of leaders from the east coast, especially from Shandong and Jiangsu, has persisted in the Xi era. As today’s military officers were not even been born at the time of the civil war in the late 1940s, the aforementioned explanations for the overrepresentation of Shandong natives seem to be insufficient. As for the civilian leadership, there are apparently multiple factors that have contributed to the high percentage of Jiangsu natives.

The continuing predominance of east coast natives under the Xi leadership

Following Chinese norms for elite recruitment, provincial leaders (except for the provincial Party secretary, the secretary of the provincial discipline commission, and the police chief) usually have advanced their leadership careers in their province of birth. The lower the level of the administrative unit, the higher the chance that local natives will serve as officials in the Party and government bodies. These trends seem to have continued in the Xi era, although the Central Organization Department of the CCP has recently made greater efforts to broaden the experience of officials, especially young and promising ones, across regions and sectors.

Table 1 shows the provincial birthplaces of the full members of the 18th and 19th CCs formed under the Xi leadership. The eastern region has maintained the same level of high representation –– 41.9 percent and 42.6 percent, respectively. There are 31 natives of Shandong and 19 natives of Jiangsu who serve as full members of the 19th CC, accounting for 15.2 percent and 9.3 percent of the total membership, respectively. The trend of overrepresentation of CCP senior leaders who were born in these two provinces will likely continue in the next CC formed this fall. 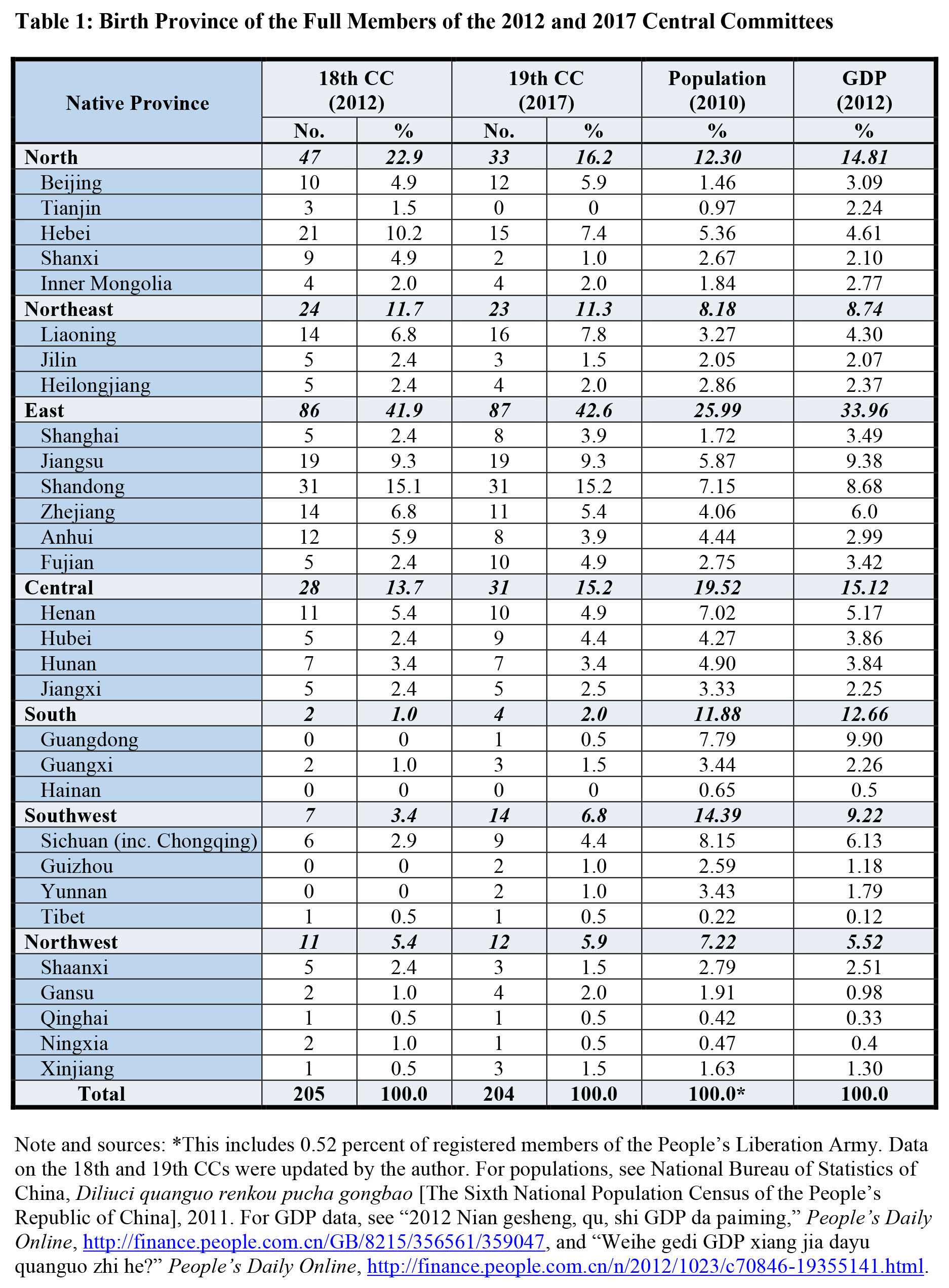 Compared with his two predecessors, Xi Jinping has enjoyed the advantage of having broad regional ties. He was born and raised in Beijing and attended college in the capital city. As a sent-down youth, he spent seven formative years in Shaanxi, which was also his father’s birthplace –– what Xi has identified as his “place of ancestral origin” (jiguan). Xi advanced his political career, however, primarily in coastal regions, including three years in Hebei, 17 years in Fujian, five years in Zhejiang, and almost one year in Shanghai. This combination of experiences in both inland and coastal areas, and in both rural “yellow earth” counties and frontier cities of the country’s economic reform and opening up, broadened Xi’s political network and power base across a large number of localities.

Fujian natives on the 19th CC, for example, doubled in number from the 18th CC. Many of them worked very closely with Xi during his tenure in Fujian. They include Central Propaganda Department Director Huang Kunming (1956); Beijing Party Secretary Cai Qi (1955); NDRC Minister He Lifeng (1955); Public Security Ministry Party Secretary Wang Xiaohong (1957); and Central Military Commission (CMC) Political Department Director Miao Hua (1955). They all became full members of the CC in 2017 for the first time.

Contrary to expectations, however, the number of Shaanxi natives on the 18th or 19th CCs did not increase. The percentage of Shaanxi natives with full membership on the CC has dropped by about half during the Xi Jinping era compared to the 16th CC under Hu Jintao. Of course, some senior leaders who obtained seats on the Politburo Standing Committee (PSC) and the Politburo at the 19th Party Congress have strong ties to Shaanxi. Some call Shaanxi their “place of ancestral origin,” while others, like Xi, have experience as sent-down youth there, and still others previously advanced their political careers in Shaanxi. They include members of the current PSC, Politburo, and CMC (Li Zhanshu, Zhao Leji, Li Xi, Wang Chen, Zhang Youxia, and Zhang Shengmin).

Some provinces are noticeably underrepresented in the Central Committee membership, especially given the population size and/or economic prominence of these provinces. Table 1 also presents each province/region’s percentage of the overall population and overall GDP in recent years. Southern China has been grossly underrepresented on both the 18th and 19th CCs, holding only one and two percent of seats, respectively, even though the region makes up 12 percent of China’s population and 13 percent of its GDP. There was not a single representative from Guangdong — despite it being China’s richest and most populous province — among the 205 full members of the 18th CC, and there is only one full member representing the province on the 19th CC: Minister of Human Resources and Social Security Zhang Jinan (1957), who was born in Guangdong. Zhang is expected to retire from his ministerial position soon.

Chart 1 shows the birth province distribution of the current Politburo members. Leaders born in the coastal region occupy 20 out of 25 seats (80 percent). More than half (52 percent) were born in China’s eastern region (Shanghai, Fujian, Zhejiang, Anhui, Shandong, and Jiangsu). Seventeen provincial-level administrations –– most of which are in the inland region –– do not have any representatives on this prominent decision-making body. 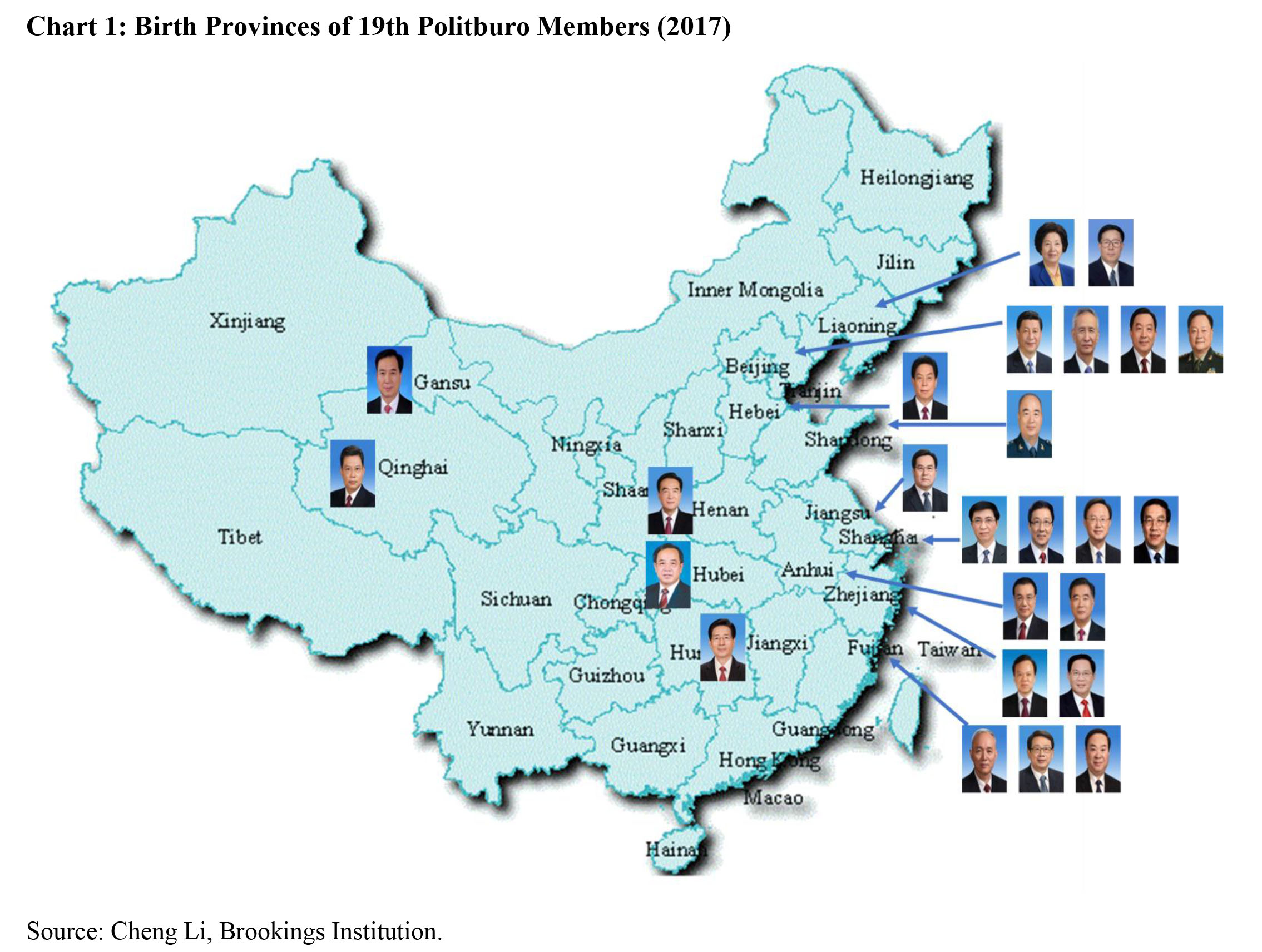 Like the 18th Politburo, no current Politburo members were born in the southern or southwestern regions, which together make up more than a quarter of China’s population and more than 20 percent of the country’s GDP. The absence of Cantonese and Sichuanese representatives in the two recent Politburos sharply contrasts with the early years of the reform era when the country was largely led and influenced by heavyweight leaders from Guangdong (like Ye Jianying) and Sichuan (like Deng Xiaoping, Yang Shangkun, and Yang Baibing).

Prospects for the 20th Party Congress and beyond

An important finding from the data collected about the geographic distribution of leaders at the 18th and 19th CCs is that the trend toward higher east coast representation at the expense of the south and southwest regions has continued in the Xi era. Liaoning and Hebei have also been overrepresented in both recent CCs compared to the relative populations of both provinces. It will be informative to compare these findings with those from the newly formed 20th CC and its Politburo this fall. Based on the candidate pool for the new CC, it could be expected that the representation of natives from central China (especially from Henan, Hubei, and Hunan) will significantly increase.

The phenomenon of persisting overrepresentation of leaders from the east coast deserves further scholarly investigation. This inquiry will help us better understand some important variables like subculture, historical legacy, regional educational systems, the influence of paramount individual leaders, political socialization, and the correlation between economic wealth and the formation of political elites.

The trends regarding the geographic distribution of CCP leaders are closely related to some crucial political issues that China now faces, including the enduring economic gap between coastal and inland regions, the need for both regional innovation and national cohesion, and the tension between the demand for regional representation and restraint over the rise of economic localism. The demographic imbalance between the birth provinces of political leaders represents just one of the many forces with which the CCP leadership must contend when charting the country’s future.