Amid what the Chinese leadership conceives to be “profound changes unseen in a century,” China’s political clock is winding toward the convening of the 20th National Congress of the Chinese Communist Party (CCP) this fall. Since 1977, the CCP has regularly held a Party congress every five years, which has been an occasion for large-scale change within the Chinese leadership and embarking on a new trajectory in the country’s domestic and foreign policies.

The personnel changes at the upcoming congress are simultaneously more anticipated and less predictable than most previous congresses. More anticipated, because it is beyond doubt that Xi Jinping will continue his third term as the Party chief and head of state. Also expectedly, Xi’s proteges will occupy more senior leadership positions than ever before. Less predictable, because some of the norms and rules of elite recruitment established in the post-Deng era such as the mandatory retirement age and term limit, which applied to the previous three congresses, will not apply to all members of the newly assembled Central Committee (CC) this time. Thus, analysts of Chinese leadership politics will likely be far less capable or effective at forecasting the new leadership lineup at the 20th Party Congress.

Given these paradoxical circumstances, well-grounded and multifaceted empirical research is essential for overseas analysts. Two questions deserve greater attention as a prelude to this consequential event. First, what do the status and composition of the current leadership, including the ongoing substantial reshuffling of top provincial officials, help reveal about the scale and scope of the elite turnover at the 20th Party Congress? Second, what are the most intriguing questions for observers –– likely entailing the most important unsettled issues from the perspective of Zhongnanhai (CCP central headquarters) –– involving personnel promotions, reappointments, and retirements?

As has been the case over the past 45 years, this once-every-five-year event involves turnover at all five levels of leadership: central, province, municipal, county, and township. All Party committees, comprised of approximately 170,000 officials, need to undertake review, reelection, and reappointment roughly within one year leading up to the Party congress. During similar preparations for the 18th Party Congress ten years ago, the Chinese authorities reported that more than 100,000 “senior officials” (above the county level) had either retired or were reassigned, making way for newcomers.

For the upcoming changes in the key decision-making bodies of the CCP, in my estimation, about two-thirds of the 376-member CC, about half of the 25-member Politburo, and more than half of the 7-member Politburo Standing Committee (PSC) — the supreme decision-making body— will be newcomers, signaling that a generational turnover of Party leadership is indeed underway (for the CCP leadership structure, see Chart 1). 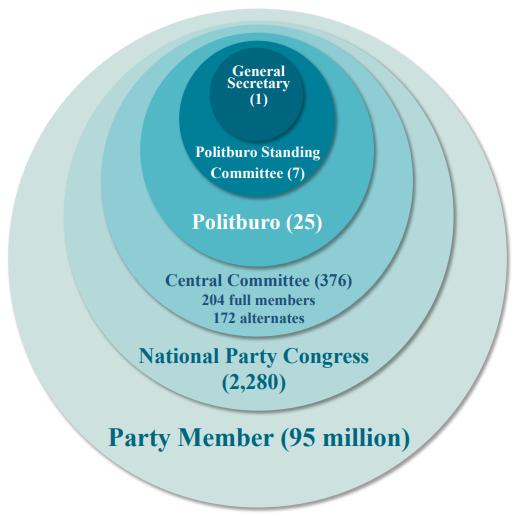 A large-scale generational change has indeed been taking place at the subnational levels of leadership, including in province-level leadership. In fall 2021, 14 of the 31 province-level Party committees underwent reshuffling, and the other 17 will soon follow in the first half of 2022. Based on the data from the committees that already reshuffled, only 3 percent of standing committee members were born in the 1950s, and about one-third of new standing members were from the post-1970s generation. Most provincial leaders were born in the 1960s.

Among China’s 31 provinces and four municipalities (Beijing, Tianjin, Shanghai, and Chongqing), all but one of the governors or mayors were born in the 1960s, with 94 percent appointed in the past couple of years. Only three of them –– Beijing Mayor Chen Jining (born in 1964), Shanghai Mayor Gong Zheng (1960), and Ningxia Governor Xian Hui (1958) –– are full members of the current CC. Seventeen of them (55 percent) are not even alternates. All of them likely will obtain full membership seats on the next CC. I estimate that 85 percent of the seats on the next CC will be held by the post-1960s and post-1970s generations, compared with 52 percent on the current CC, on which only two members were born in the 1970s.

Not only provincial administrations have been undergoing major generational changes, but other key leadership apparatuses have also begun substantial reshuffling. Within military leadership, for example, in the half-year period between July 2021 and January 2022, Xi Jinping granted full general rank (shangjiang) to 16 officers on three occasions. These newly promoted highest-ranking officers account for almost half of the full generals currently on active duty in the Chinese military. They were recently appointed to some of the most important positions in the People’s Liberation Army and the Armed Police Force. They include Commander of the Army Liu Zhenli (1964), Commander of the Air Force Chang Dingqiu (1967), Commander of the Navy Dong Jun (1963), Commander of the Rocket Force Li Yuchao (1963), Commander of the Strategic Support Force Ju Qiansheng (1962), and President of the National Defense University Xu Xueqiang (1962). Only one of them is a full member, and three are alternates, on the current CC, while the other 12 are expected to enter the next CC as first-timers.

Table 1 presents the status of and prospects for 19th CC Members. As many as 193 members, including 115 full members (56 percent) and 78 alternates (45 percent), have already retired or moved to ceremonial posts. In addition, four members died and three were purged. Given that at least 53 percent of current CC members will be replaced, this table provides the empirical evidence for the aforementioned prediction that two-thirds of the next CC members will be new (including those promoted from alternate status to full membership). 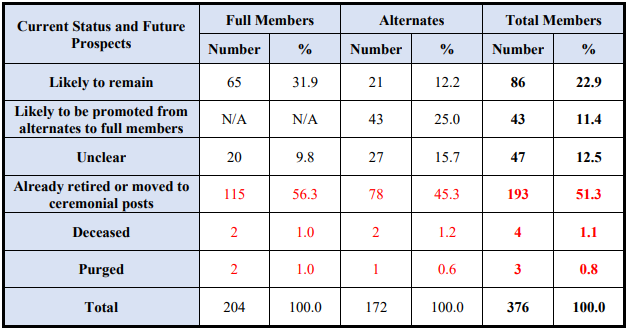 In the post-Deng era, especially at the previous three Party congresses, the mandatory retirement age and term limit have been the overarching institutionalized rules and norms applied to leadership turnover. For example, at the 18th CC in 2012, those born before 1945 were disqualified from membership. The same happened to those born before 1950 at the 19th CC in 2017. Given that PSC members must be Politburo members and Politburo members must be CC members, the age limit has thus applied for all top leaders. The term limit has also specified that leaders must have no more than two five-year terms in the same position and three five-year terms at the same leadership level. These norms and rules have imparted a sense of consistency and fairness.

Apparently, the upcoming 20th CC will not follow the norm that only those born in or after 1955 are qualified for membership. Xi Jinping, who was born in 1953, surely will stay on, and the abolishment of the presidential term limit in the PRC Constitution in 2018 paved the way for Xi to exceed the two-term limit as general secretary of the Party. The CCP leadership recently announced that the selection of the 20th CC will “not be based solely on age” (buwei nianling), implying that a few senior leaders who were born before 1955 will likely stay on or enter the Politburo and the PSC.

This causes ambiguities in some key areas of Chinese leadership. The top leaders of the three most important administrative teams –– Li Keqiang (1955), Han Zheng (1954), and Liu He (1952) in the economic and financial sector; Yang Jiechi (1950) and Wang Yi (1953) in foreign affairs; and Xu Qiliang (1950), Zhang Youxia (1950), and Wei Fenghe (1954) in the military –– are all supposed to retire based on the previous norms. As for the premiership, the two-term limit remains intact. The new Party resolution, however, allows a few of them to remain in the Party leadership. Similarly, among PSC members, only one member, Li Zhanshu (1950), is expected to retire (though he may serve as the next vice president of the PRC). The age span of the other five members (excluding Xi) is three years. There are no objective criteria to determine who will stay and leave.

Most leaders born in the early 1950s will likely retire at the 20th Party Congress. This forecast is based not only on the fact that the ongoing elite shuffling in the provincial and military ranks has largely followed the age limit, but also on the imperative, as recently noted by Xi, to promote younger leaders to the top leadership. In my assessment, four to five younger leaders (especially those born in the 1960s) will likely ascend to the next PSC.

Understandably, with this anticipated large-scale leadership change on the horizon and the ambiguity surrounding major personnel issues, deep anxiety and tensions in the country are sure to arise. What procedures and mechanisms will Beijing adopt in preparation for the congress and especially for the selection of delegates? How will Xi and the Chinese leadership reconcile these seemingly contradictory needs and concerns and maintain leadership unity and sociopolitical stability? The following two essays in this series will address these questions.